Beautiful landscapes, exciting rides, famous characters? What more could you ask? We ended up running late to get there, but as it was raining, we figured the rides wouldn’t run until later anyway. We got there just before 11 and headed in, excited. The buildings were fantastically detailed and looked beautiful, and the Halloween theme pleased me to no end! 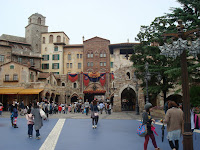 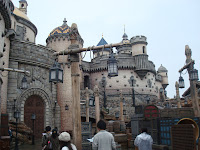 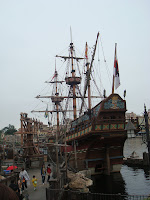 The happiness ended about there. We headed to “discovery port” or “discover how crap this island is” and saw a cool roller coaster. We decided to grab our first fast pass, thinking we’d come back in about an hour; this assumption was incorrect. The fastpass hadn’t been signposted, and unfortunately, it was not “Journey to the Centre of the Earth” as we’d assumed, but “Journey to a particularly shithouse piece of junk without a real point of existence” aka “2000 leagues under the sea”. Our disappointment was compounded, when we found out it was 11am and we couldn’t get another fastpass until 1:40! Then, even better, our fastpass was actually for between 3-4pm, so not that “fast”! Way to go DisneySea! 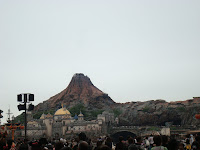 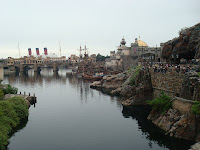 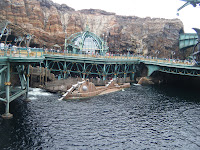 My real beef with Disney is they let in so many people. If I’d wanted to admire the scenery, I could do so, with 50 or so people in front of every angle I could possibly try. When we were thirsty, we could hop in a 20 minute line to get a drink, if we wanted hot chips, probably a 40-60minute wait. Most food stands (even for things like hotdogs) had a long, long line. When we passed ice cream stands, you guessed it, a line, though luckily for us, we’d come prepared with sandwiches! Of course, with so many people lining up for food all over the park, the rides had to be free, right? Wrong. Two trillion people were lined up at every ride, and by the time we’d gotten our fastpass to “2000 seconds of crap”, the fastpass options for “Indiana Jones and the temple of waiting forever” and “may well be a good rollercoaster but I’m still stuck in the temple of waiting forever” had shut, not that we could have had one until 1:40 anyway… 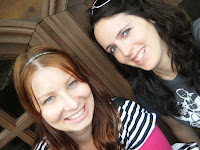 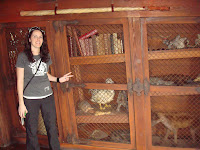 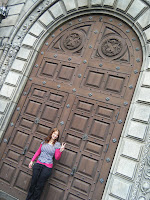 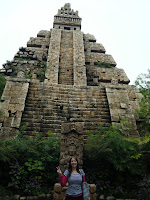 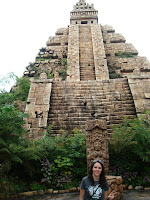 Yes, to elaborate, we had all the fun of a four person family behind us! Oh wait Carly, you say. You’re not being very understanding- children will be children! Give them a break! I’ll give that kid a **** break in the neck! I’ll break his head clean off his shoulders if given half of a chance! To start off with, what parent takes a young child on a ride with a line for that long? Who thinks it is a good idea? So the kid starts off the first hour by repeatedly yanking the ropes in the lines. He runs from side to side and starts counting loudly and annoyingly. The parents do not attempt to hush or calm him. He tries to run in front of us to see ahead, and occasionally knocks us or our bags. (This happens about every 5 minutes, despite our clear looks of disapproval.)
The family did in fact chide him… when he pushed the tree next to us, which then released a shower of water (it had been raining) all over us and our phone. You’d think they’d get the message at this stage but no! Actually, the older sister took more of a parenting role than the mother, who mucked around with him in line (they were trying to push each other around- even though she was trying to distract him, you’d think she’d pick a more appropriate thing to do in a crowded line, right? What a retard.) All this time I was telling myself “Mum and dad would not want me to scream “URUSAI!” (shutup) in his face”, “mum and dad will not bail me out for assault charges in Japan”, “mum and dad don’t like it when I use the F word, even if it’s the U word in Japan”. Then I pictured Dad’s eye twitching as the little shit ran riot. During the second hour, he continued to attempt to push past us (I think Sarah discreetly bumped him/pushed past him where possible), whinged and had a cry, thus proving my argument that the parents should not have put a child through such a wait- both for the child’s sake AND for ours. At this point, I glared so repeatedly and malevolently that the parents should have felt my gaze burning like acid through their sternum, but alas, the mother instead pushed in next to me, knocking my bag, so I guess that’s where the kid got the atrocious manners from. The older sister obviously took after the father, who was quiet and kind of looked like all hope had been taken from him. The sister was quite nice, and told the boy off most times she saw us readying our firsts to punch through his face. Finally, when we had about a half hour wait left, he started almost yelling, and the father actually did tell him “urusai” (shut up- rude word)! Ugggghhhhhh. 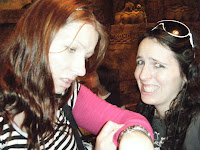 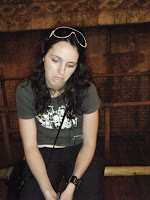 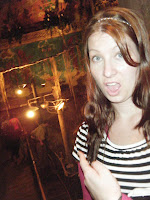 ^^This ride is taking forever... yeah, it sucks... wait, what is Indiana assface doing mooching around behind me instead of moving this line forward?!?!^^ 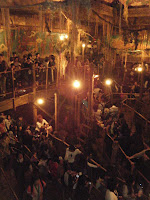 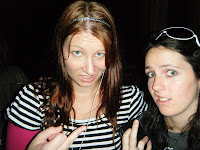 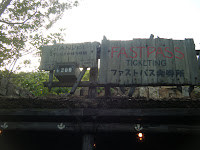 ^^This line was the fourth line where we queued in long lines to progress into the next room. At this stage I'd say we waited 2-2.5 hours and had at least another half hour ahead. The 200 minute wait and still the people entered.^^

When we finally got on the ride, it was okay. It was even a nice ride. Though occasionally bumpy and jerky, for the most part it was smooth and fast, it had some interesting scenery and a cool smoke effect. It wasn’t at all scary. It also wasn’t worth one hour wait, let alone 3.5. We walked out, disbelieving, and left the family of retards well behind, at this point, the waiting time had been acknowledged at 200 minutes.

We really did not care for “2000 leagues of sub par” but felt that we’d bloody better do at least another ride, ($60+ dollars! OVER SIXTY DOLLARS FOR TWO RIDES AND THE TORTURE OF WAITING?!) so rushed down there. Our fastpass, again, not really that fast, still made us wait about a half hour, though some chumps were obviously waiting longer. Yeah, the ride itself was average. It pretended to go under the water (it was okay at that, at least) and just had bubbling water between the window glass to give that effect. It was no adventure ride, that was for sure. I’m not even sure it was worth waiting the half hour with the fast pass for it! When we got out, it was hard to even walk through the streets there were so many people, and at 5pm, there were still lines at every food vendor and humongous lines for rides. We decided just to cut our losses and leave, as our feet were killing us, having been standing in line for so long. 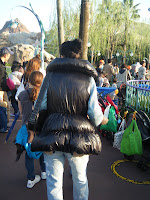 ^^In other news, this woman had a really wack jacket.^^

We met up with Ayumi for about 5 minutes, had a short talk, then left. Feeling that we had to end the awful day with some positivity, we went to Macudo. Again. Australians, I beg you, support Dreamworld! The rides we have in Australia (excepting the rollercoasters occasionally- haven’t tried Superman Escape) are superior to the rides I’ve seen in Japan with superior crowd control and variation. The only thing the Japan parks have is theming, which I’ll admit, is fantastic. After all that, I find the rides are better off at home!
Below is a letter I have composed to DisneySea. This is the censored version! 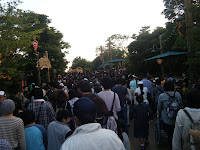 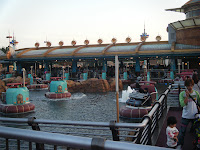 ^^These photos were taken within minutes of each other. The first was just the crowd on the path, not a line. The second is the line for the aquatic ride, while the crowd from the first are still wandering around. Take a close look at exactly how many people are crammed up under that shelter... just so you know, the line extended further on the right past the edge of the photo. Every ride we saw was packed like this, every food vendor had a line and there was still a crowd on the streets...^^


To DisneySea,
your themepark was arse. It was worse than arse, it was the biggest, prettiest pile of crap I’ve seen but it was still freaking crap. There’s no point in going if you let in so many people I can’t get on a freaking ride. I thought it sucked to pay for USJ’s fastpass, but your “timing”system is plain useless. If you can afford to have employees cleaning “pseudo-rusted-industrial-barrel-bins” that are SUPPOSED to look derelict and picking up individual pieces of popcorn in the middle of a giant, crushing crowd trying to move, you’ve got the freaking money to put a cap on park numbers. You provide an extremely poor, outrageously overpriced service and have probably made me grind half of my teeth to dust- I will forward you the dentist bill. If you gave me a FREE TICKET, I would still rather not waste hour after hour of my life, where I could have been doing something productive, like filing my nails, taste testing mouthwash brands or seeing if I can find animal shapes in clouds. ALSO, screw Mickey Mouse and all your previously good costumes ruined by Mickey ears!
I wish for you to catch fire, or spontaneously combust. Or… just freaking cap numbers.