Thanks for our parcels!

So, first off, thanks for our parcels Dad and Mandy! We begged everyone possible to send Vegemite and now we have an additional 3 tubes so I am happy. Sarah's mum sent her TimTams (ew!), Snakes, Twisties, some oats or something and other stuff.
See Dad? I'm not greedy like Sarah, you should be very happy to have me as a daughter. Dad, stop rolling your eyes. 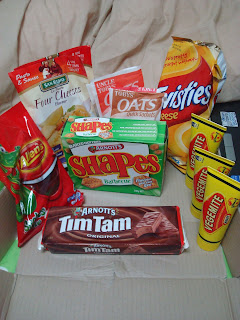 Anyway...
We invested in some Malibu today after trying out our SUPER ICE MACHINE last night. (It's especially super 'cause we only paid about $7 for it and it's a plastic fantastic piece of junk). We'll take photos on Friday at our JF Friday night cocktail party. Our vodka was just terrible with watery apple juice... the whole affair was unpleasant and filled with much ice flavouring.
We went to Nanba today, returning to where we'd been when we went to Pure, except this time the shops were open. The shopping arcade probably runs for about 500m or more. We found some bargains (and some burgers... cheesu to, meatu to, ketchup to?) and passed the place we got our photos taken. It occurred to me that we could really use this technology in Australia. Observe: 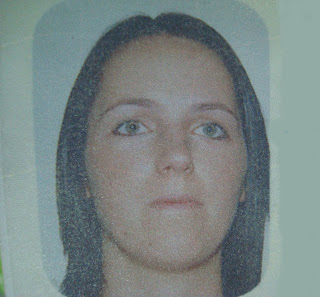 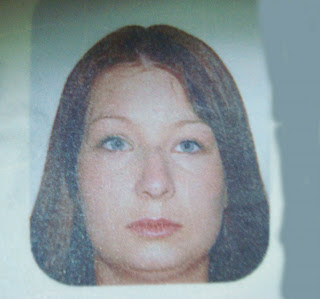 ^^ Saros and Carlos looking like surly criminals in our passport photos ^^

We've clearly been going about things the wrong way in Australia. Those pictures aren't cute! They don't exude femininity and flowers and pink things! Our lips are barely noticeable! Where are the sparkles and luminescent glow? How are we to attract boys with pictures like these? So, using my ULTIMATEPHOTOSHOPSPARKLESKILL (TM) I helped us out a bit. My ULTIMATEPHOTOSHOPSPARKLESKILL (TM) will be bringing all the boys to the yard. 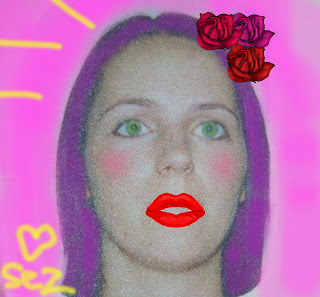 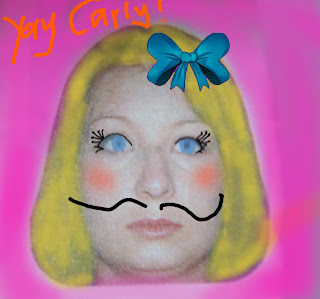 Of course, the real photos we took on Sat included no moustaches and a wide variety of hat choices. Note the cat on my face in one of them, a delightful touch. 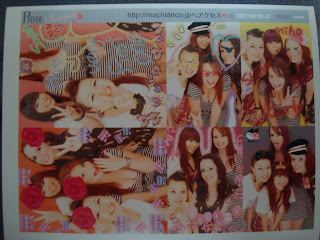 Also, we found a fantastic costume shop (so cheap, crazy $2 suspenders and $5 mini hats) but so many of the CHEAP elaborate costumers were like a size super small. I'd be lucky to get my hand in them let alone my whole self. The store workers were dressed in these costumes and they were such elaborate frilly dresses! It was super cool! I got some other stuff, I can't remember what it was, so obviously it wasn't that good (in case you were wondering, Saros and I both bought suspenders, I got a mini hat and Saros got a tie). I've been looking a fair bit for presents but there's only so much you can get... everything is cheap jewellery shops (not always good jewellery) and ecclectic clothing. Flowers, layers and overall type things are totally in. I hate most of the stuff, so it's almost a good thing I'm super gigantic compared to their sizing. We've learnt not even to look at shoes.

We tried cooking (by we, I mean Sarah, who doesn't seem as content with a vegetarian diet) chicken tonight and most of our sauces were pretty err... *cough* yeah, we hated them. But Sarah happily liked some sort of sauce made for beef that had beans on the cover. We still have no idea what they're called or what was in them. There seems to be a strange old man singing to a boy band on tv, wearing what looks like one bright yellow leg of tights and one black faux wet look leather leg of tights (the black half is flared), some sort of fluro green Indian/tribal style jacket, with a super sequinned vest over the top and a silver sequinned headband. His dancing is like an odd rolling shuffle. If you are picturing that, you can understand the confusion I am feeling right now. He now is also wearing what appear to be swimming goggles with coloured lenses in them- red that you pull down from the top, green on one side and blue on the other.

Oh, and there's a drunk guy living in J&F who appeared to just tell me he likes pudding. He's harmless and friendly and speaks almost no English, and apprently just used to shuffle around quietly; Linda and Nicolas say something got him really excited in the last few days and now he's drunk and randomly shouts things out in Japanese. He was just amused by my typing speed (not actually that fast)and made a BRRRRRINNNGG! noise with spirit fingers. He was astounded by the concept of a laptop mouse bad.

Suppose I'd better go now, Juerg bought Monopoly Here and Now Osaka and Super Mario Brothers and tonight we're playing Super Mario! (They're trying to work out the rules as we speak. It looks pretty cool!).

SHOUTS OUT:
Vauses: Dad, who sent me Vegemite, Mum, who I'm sure is investigating the Chicken marinade from the butchers?? This chicken seasoning ain't good mum, help! Ange, whose offer to play online Monopoly belatedly I just received (I lost twice, horrifically).
Lawries: Tom, I know what you got for a present! (And I'll never tell!) Sarah says thanks for the present; it was the perfect combo!
Both families, we missssssssss you! (But now, we won't have to miss Vegemite, which is good).
Ange again, what can I say, you comment lots. It's good. Also, I'll email you my votes- be interested to see your comments on it.
Ben, you live on this blog, like, in the proverbial blogging vent or whatever. Also, I watched that giant crab video and was impressed.
Laura Simpson, welcome to the blog! V glad to hear from you!
Kim Simpson, I thought of you today when I muttered "Minger" at some idiot who walked right up to me, waited until I moved, then continued walking because I was standing in her way. There was, for your information, about a metre empty space both sides of me. Also thinking of you now as I stare at the guy in the kitchen who legit has the most retarded rats tail ever. I want to cut it off. How could that douchebag think he looks good?

Not that I'm judgemental or anything.
Posted by Carly + Sarah at 5:04 AM