Yes, I was listening to that song - who on earth would think that would be a good song? Anyway, on to the vague, rambling and obscure reference filled post! *Heroic pose*

Scandal
Scandal are a band from Japan I've liked ever since the Arrancar arc of Bleach,.So I'm watching Kurosaki go all "BANKAI" and suddenly, on comes Shoujo S, one of Scandal's more famous songs and all of a sudden, it's like, coolies. So then I download Doll and Beauteen and they're coolies too. Point? well actually I've just been rambling, but anyway, we found out by ABSOLUTE CHANCE Scandal were playing at Zepp Osaka, and I turned to Sarah and said "Bro, we gotta hit that, or are ya doggin me?"
Actually no, that's probably one of our good friend Jim "Mixeleven" 's many varied and indecpherable "hood lingo" status updates. But we went on a quest to get tickets, and it was a quest worthy of a novel, or the following sentence:
We couldn't buy tickets online so Sarah found a 711 and got the tickets.
Wondering how big it was going to be, and also how crap (I read a review saying Scandal were lame live), we hit the Tanimachi line and then the Chuo line to Kosumo (Cosmo) square. Cosmo Square brings to mind some sort of wicked entertainment district- I know I certainly expected that rogue bay ferris wheel to be sitting there right next to the station but alas, it was at least a stop back. I was crushed.
So luckily Sarah checked where we were supposed to go, and we set off down the road (C: Are we going the right way? S: Yep. C: Really? S: Yes, really. C: So you actually know where we're going? S: YES!) and what do you know, we got there!

To view the BLEACH opening theme, clickies and enjoy the kind of creepy seductive look of the characters- except the ugly ones who are in the dark or facing away.

There was a big ass line and our tickets being 1196/1197 were therefore not exceptional tickets... a long time of staring at each other and trying to work out where to go later, we eventually pointed to our tickets with a confused look and Japanese people took pity on us and pointed us in the right direction. From there, it was a good hour waiting in the rain, with my sweet ass umbrella ("Shoot to Kill, Shinsou!") snapping out and almost decapitating someone.
Or not, but hey, I bet it could. Also, the jacket, which saved me from rain on my arm. Possibly also egg on my face. No rain or egg on my arm- not a glob.
Unfortunately, not all in the line were as prepared as us, and could only wish they had an umbrella while the points of my umbrella dripped all over their heads.
So to make a long story short, as so far, I've been making a short story incredibly long, we got in and were directed to an awesome section, which we eventually figured out was just for girls, because Japan is fantastically sexist like that. We had an awesome view, good luck to the (shorter) crazy girls behind us. So we figured the opening band would play, only there were no opening bands, which really, was good, though they did play some Bono (Elevation) beforehand.
Then, with an explosion of sound that possibly rendered me legally deaf for the foreseeable duration of my life, it began. 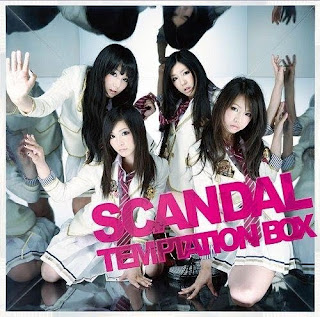 
I was worried they'd suck. In fact they were awesome- excellent singing and harmony (a few times the high pitched one was too loud and drowned out the other one, but man, she sounded like a 3 year old on crack). Even though I didn't know the majority of the songs and had NO IDEA what they were singing about, all the tunes were catchy and their costumes were kind "cute school girl". They opened with "Everybody say yeah", then "Beauteen" came up, which was good- they performed it really well, "Doll" made an appearance and Shoujo S, which I felt was probably their poorest performance (difficult vocals, to be fair, and late in the set) though still quite good.
Only thing that totally bewildered Saros and I was three times, they stopped playing and started this monologue (which we obviously didn't understand except at one time they were talking about Takoyaki and Gohan). The crowd itself was wack- during the monologues, which lasted a fair while actually, they stood listening gravely, with the occasional laugh or cheer when required.
During the show, they were electrified, with a "Yeah yeah YEAH" or hand pumping/waving action when required, otherwise, completely silent and docile. Also, did I mention, what the hell were they talking about for so long?! In the middle of the set, they chucked their instruments and sang (and did some weird ass arm dance) to Shoujo M (not the same as Shoujo S). The song was cute, but what the hell were the arm movements going on? Sarah thought they were doing a mid show stretch. 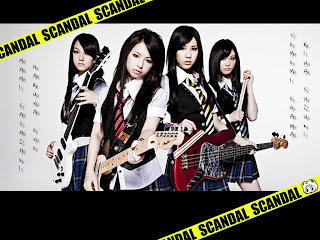 They left the stage and immediately the crowd started chan"En cor ru, en cor ru!" which I eventually figured was encore. So we waited, and we waited, and they chanted and clapped. Still we waited, as the techies came on stage to fiddle with guitars and shit. The only reason I stayed at this point, was cause the soundies behind us looked like they were waiting for something, and sure enough, Scandal reappeared to the delight of their fans. They played another song, then launched into some sort of speech so we thought it best to hightail it outta there. Anyhow, we beat the crowd back to the station and headed home, to my usual cbf dinner of vegemite sandwich, ironically, also my breakfast and lunch, though I have purchased knock-off Frosties. (I'm not kidding, they actually have Frosties but Sarah told me they were too expensive and I had to get knock off. She has knock off cocopops).

On Sunday we met up with Yoshida to go shopping as she wanted to buy us something to remember her and Japan. We were originally going to the horrifically overpriced Kintetsu store, but ended up going to Yodobashi camera, which I'm ashamed to say actually had a whole other store in it that we never knew existed! We met in a cafe after getting quite lost on the way, and had some fantastic chocolate pudding. One thing the Japanese do well is a good pudding- their pudding is fantastic. (Cold pudding, FYI). 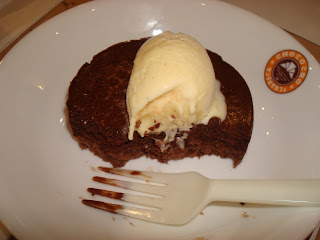 We then went to UniQlo in Comme Ca, where Saros and I angsted over both wanting the same Jacket (it's a good jacket!) and eventually both got it. We travelled to other stores, buying fragrances, salt and pepper shakers (They were under $1.50!), Mint M&Ms (which were delicious, btw) and other misc stuff. By this time, it was almost time to meet Chizuko and Miho, so we went back to the station and then to Saizeriya for dinner. 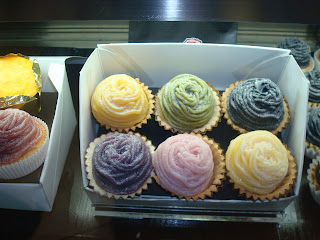 ^^Comme ca had all these sweets shops! These cakes made me think of Nanna V!^^


Saizeriya is awesome. It was our shout as a thank you to them, and it only came to 5700Y, which is very cheap. The pizza was the best I've had in Japan (it was Adelaide quality. Not quite Pizza Hut, but certainly up there!) The servings were small, so we just got lots! We had Garlic Bread that actually had garlic (stuff you La Pausa!) and Sarah and Miho had Spaghetti Bolognaise, Creamy Spinach and Bacon Spaghetti and Steak between them. 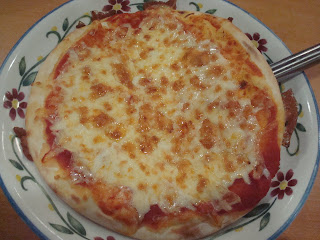 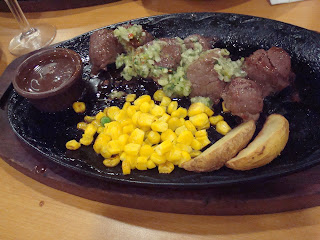 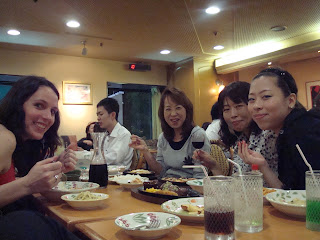 It was all you can drink for like, $2, and I found I actually quite liked the Melon- because it didn't taste like Melon!
We gave out our thank you presents (including for Chieko, Noriko and Masako) and Chizuko was quite overcome by the Opal necklace. So thank you mum and dad- we owe you! Noriko was quite nice; she couldn't come but gave us both a mirror and an M&Ms Mint strap, which looks pretty swift on my camera! 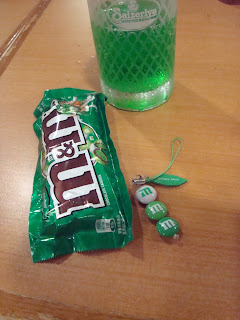 ^^ M&Ms Mint (which I'm quite partial to, the strap and my Saizeriya Melon drink!^^

After that we headed home to say a quick goodbye to Nicolas who left the next day for France. Meanwhile, Juerg's moving out to Daikokocho on thursday so he's leaving before us too! Coming up we've got Miyajima, Kobe, Lunch with Yoshida, possibly Hikone, packing and cooking Tacos on Friday and Sat- TOKYO via Shinkansen- the beginning of the end! 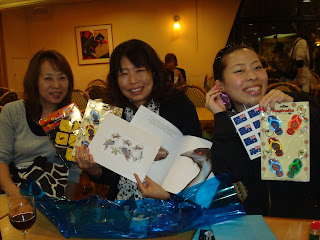 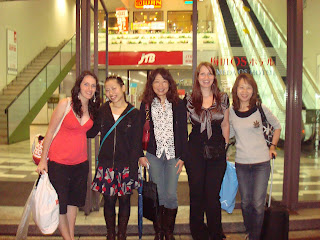 And the usual- Miss you all very much and kisses!
xx Carlos and Saros


**Edit**
P.S.
You know what's not wickhouse? No one but poor Ben commenting. Also, why am I listening to Shania? Correction, I newly love Shania. But I didn't even realise I had "If you're not in it for love" on my ipod...

Shout out-
Shania Twain, and Ben. That is all.
(She's probably reading this right now and nodding).

P.P.S.
We'll be on the move almost non-stop from now, so thank you so much to everyone who sent us a package of love (especially if it contained food!) but you probably can't send anymore. We'll probably be harder to get in touch with too. Onward- TYO and Euro!