Monday was our first day with our JR Rail Passes, so we planned to get straight into it with a long trip to Miyajima - an island about 40 minutes out of Hiroshima. Amazingly, we got to the station on time, however, we did miss out on reserved seats for the next train, and waited an hour instead to make sure we were guaranteed seats on the next one. To pass time we wandered around station, until Carly saw a nice garden out the front. So we went to go for a walk through that, until we got closer and found that it was in fact an overly large car park with very tall trees surrounding it, unseen from the floor above. Feeling a little disappointed, we went back in the station and had a look around at all the shops. JR Shinkansen stations are basically like airports, but with better signage so you actually know where you're going!

Finally, time was up and our Hikari RailStar bullet train pulled up at the stop. Inside was very flashy, it was like sitting in what I imagine First Class to be on a plane. We had reclining chairs that almost lay fully back; foot space to stretch out as much as you like, with you bags resting next to them; while travelling at 300km an hour and mountain ranges soaring around you. It was like flying in style, only smoother and on the ground. Our breakfast was some famous Belgium Waffles; another lovely present from Yoshida-san. Carly was eager to take the chocolate one, while I opted for the sugared choice. My next choice smelt like maple syrup, and upon the first bite I soon realised how horribly wrong I was, and that once again I'd been hit by the Bean Paste Bandit! (Not that I wanted to waste the waffle, so we ate them anyway haha) 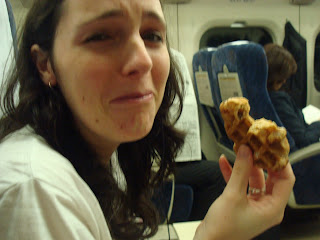 Even if it wasn't the most appealing taste. :P 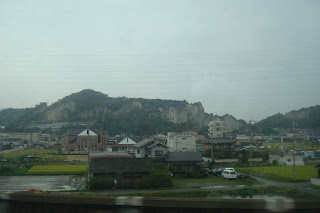 One of the cool views along the way.

After an hour and a half, we made it to Hiroshima station. It was very modern, and had a lot of European people around. We didn't stay long though, and were on the next JR train to Miyajima port. After some more city scenery with the mountainous backdrop, we arrived at the port and then transferred onto the Miyajima JR ferry which transferred us onto Miyajima island in 10 minutes. As the ferry began to reach the other side of the shore we could start making out the famous Itsukushima Shrine on the shore line. It was at this moment, that a girl in a group of English tourists declared “OH MY GOD! There’s not water! Where’s the water? There’s meant to be water?!” 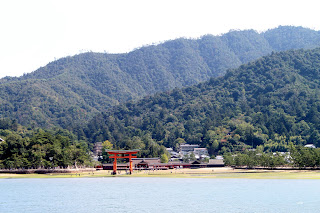 Obviously she hadn’t heard of the term, low tide. Upon arrival at the docks of, we were welcomed by the familiar smell of the ocean and slightly rotting seaweed; exactly like back home! We made our way along the outer path of the island, looking in a few souvenir shops before arriving at the shrine, which was indeed high and dry! Climbing down the steps, we got a few shots up close before heading off in search of the 5 storey pagoda. 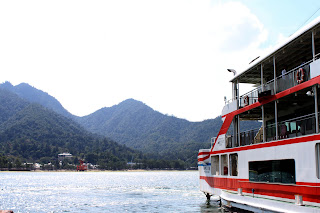 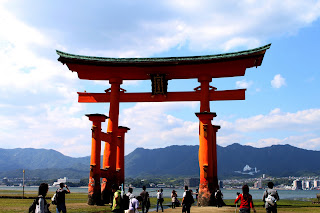 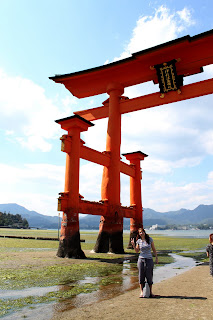 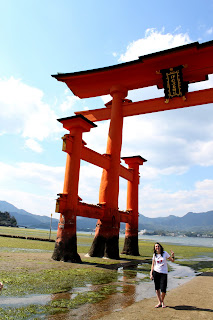 We climbed up some old steep stairs, taking a breather for some water and chips while we looked out at the ocean and Hiroshima on the other side. We were lucky with the weather, and although it was quite windy, the weather was pretty hot out in the sun. The pagoda was pretty tall, with an odd arrangement of palm trees in front of it that kind of didn’t go with anything around it. Either way, the pagoda was very interesting, but the temple that went with it on the other hand, was a little bland, and a rip off to pay $1.50 just to walk across it (it wasn’t that big and you could see straight through anyway so there was really no point in going in. 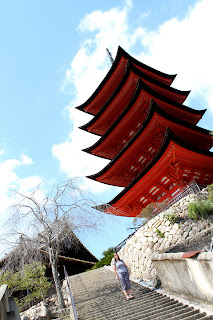 Walking around some narrow, windy roads, we found the ticket counter for the ropeway up to Mt. Misen. We quickly hopped on the minibus that takes you up to the start of the ropeway just as it was leaving. This ride was definitely an interesting one, we roared up the road; swinging around bends at top speed on one of the narrowest streets I’ve seen, with no railings and an interestingly large drop off the edge. Needless to say I tried to keep my eyes at the front most of the way up with my knuckles turning white on the hand grips. We did make it in one peace, and didn’t have to wait long before we were put in a small cable car and made our way up the mountain, which looks a lot bigger once you’re in a tiny carriage suspended at over 100m off the ground, and standing at 535m – it was a long way back down! We reached the top of the first mountain and transferred onto one of the larger cable cars that takes you across, and to the top of Mt. Misen. These apparently can carry 30 people according to the sign, however, it was pretty full with 12...so I have no idea how that would work. 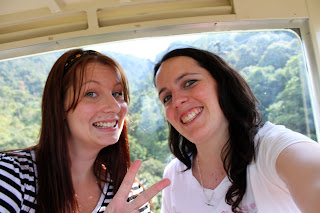 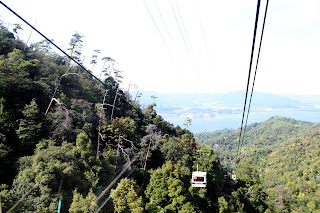 At the top, we were told to leave all our belongings in lockers as monkeys would apparently steal them. You would also go crazy and angry if you stared them in the eyes (according to the signage). We roamed around the many lookouts and stared at all the surrounding islands, mountain ranges and Hiroshima in the far distance. It was a pretty amazing experience, however there were no monkeys to be seen - to Carly's relief. For lunch we sat in the Cafe all by ourselves and made some vegemite sandwiches while looking out at the scenic view. 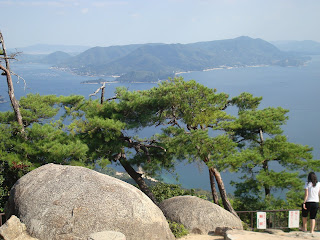 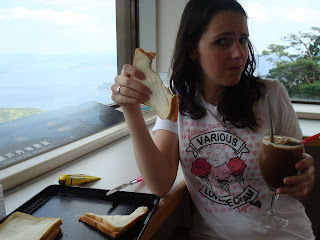 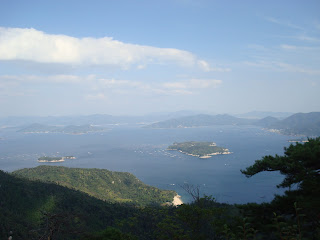 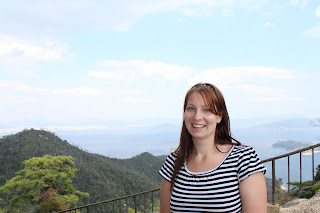 After a while, it was time to head back down, so we returned to Itsukushima Shrine, which was now in the water like it was supposed to be and got some more snaps from the temple behind it...which I think besides the good picture angles it had, was a rip off to walk around for 5 minutes and pay $3; but that is just me being stingy. 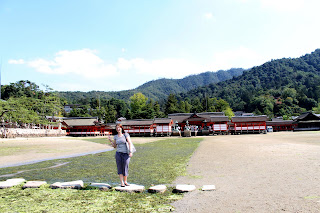 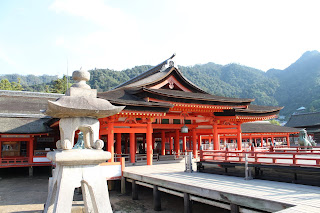 It was starting to get late, so we quickly went down the inner souvenir shopping street and bought a couple of cheap keepsakes to take home. Then it was back onto the ferry, then the JR line, then another hour wait at Hiroshima station, before finally getting the shinkansen home and passing out at 11pm. It was a great day of scenic adventure, even though we didn't get to see too much of Hiroshima, but we're returning there next week so all is good.

PS The deer on the island loved us. 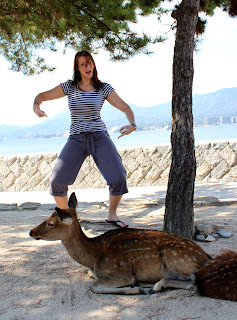 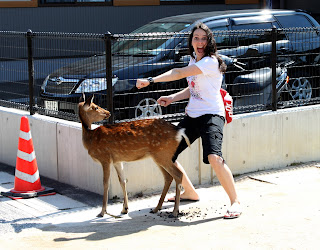 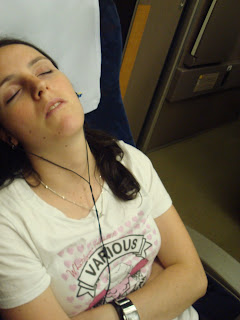