South Korea- Seoul  10:49pm 13.12.13
Today was a win of a day. We started semi-early… okay, not really that early, thinking we had to switch rooms, only to find out we didn’t, because someone else cancelled. YAY! So then we ambled out, (me putting on some more Etude makeup, of which I bought… tonnes.  Like, I bought a lot.) and headed to the coffee shop from Coffee Prince, which I haven’t seen but both Mankee and Angela have. It was fairly out of the way, (like, a hike up a small mountain) but a very pretty location. Very overpriced hot chocolate ($7!) but the view was definitely amazing. 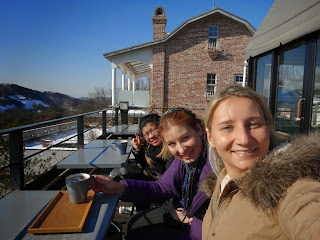 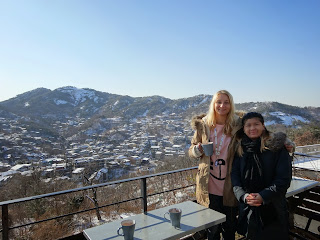 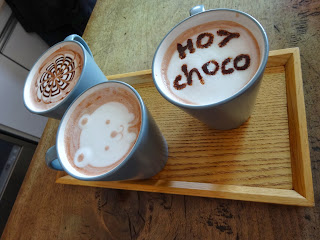 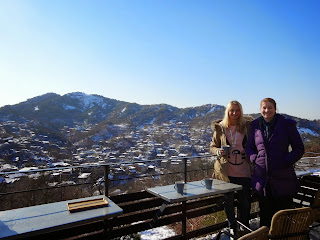 Also, they had stone horses and funny hats. 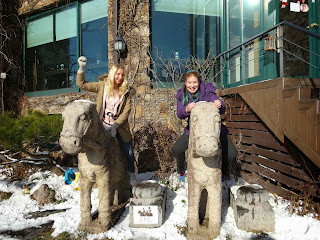 I don’t get what it is with Korea and pants-down pictures. Like, kids pulling their pants down paintings, a woman with her pants off squatting in a field of flowers… what looks like the human centipede made out of children which greets you at the gates of Gyoengbokgung Palace… it’s all a bit weird really. 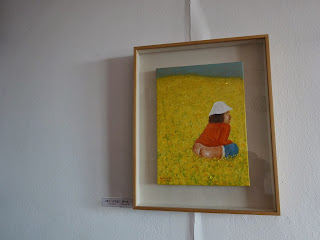 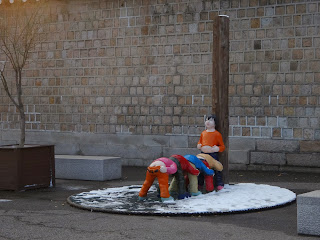 ^^Nothing good can come of this picture.^^


Anyhow, from there, we headed to Seoul Station to book our KTX tickets to Busan. This went smoothly, and life was good, for we found Pizza Hut and I rejoinced in the best Cheese Pizza once more. No offense to Mr Pizza… but… it just doesn’t really taste… well… nice. It does apparently have “a lot of love for women”. After delightful pizza at Seoul station, we headed out to Dongdaemun again to see if we could buy a joint Carly-Angela coat. We were dismayed to see a lot of the places closing- I saw a cool soldiers hat but for $20 it had marks on it so I said no. Found an unmarked one for $30, but declined, as it would have been quite difficult to put anywhere. But man I would have looked like a cool-ass weirdo. Mainly a weirdo… okay, I would have been cool in my own heart. 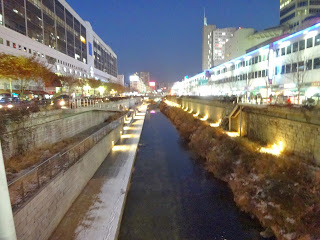 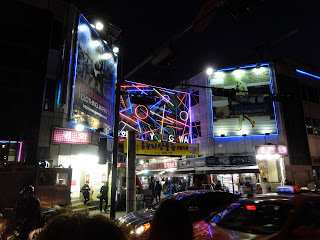 Disheartened, we then stumbled across (completely by chance) the Dongdaemun Disco Jump. We heard music and cheering and thought it might be a free concert, so we looked around and then… just one random show type ride. So we sort of shrugged and throught “Why not?”. Why not indeed… I was the only one who hadn’t seen the Disco jump in action and thought it was a pretty tame kiddy ride or something like the Gravitron.  It was a circle ride with seats on the outside, no lap bars or seatbelts. I thought maybe it spun a bit or tilted slightly, which to be fair, it did. And from the ground (especially in the second video), the tilt looks like child’s play. 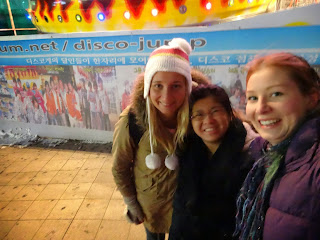 However, that was not quite all… Angela thought I’d seen it on Running Man, so I was the only one who got quite a shock when it started well… jumping. Jumping is a tame word for it- I’d say it’s more like attempting to punch us into the air, or sort of like a spinning bucking bronco. I quickly learnt to weld myself to the bars (quite a feat for someone of puny arm strength like myself- I was alternately worried between falling off of the seats and snapping my arms like twigs when we bounced. Fortunately, neither happened, and the few people who did fall off didn’t seem to worry much). 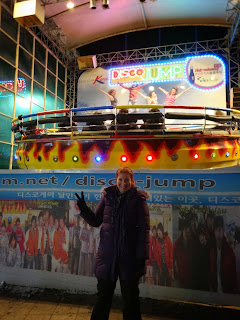 One thing that did not come across to me at first was that along with no seatbelts, you literally get airtime. As in, feet off the floor, arse off the seat, “Oh god I’m flying!” type sensations, along with a wrenching pain in your arms as you attempt well… not to fly away. The worst I found, was when I was on the sides because it was tilted and bumped. My feet couldn’t find purchase and so I was just hanging sideways (occasionally kicking Ange a meter down from me) dangling and bumping around. The controller, upon finding out we were from Australia, would gleefully shout out “Hoju! Hoju!” whenever we were at the top  and this was usually followed by a period of waiting before a “SURPRISE!” huge bounce or just a wave of bouncing that felt rather like a dog shaking something back and forth with its teeth. At one point, Mankee fell off but was held by Ange. We didn’t just get the special treatment- there were some Japanese girls on with us and the controller would joyfully yell out “Neesan! Neesan!” when trying to launch them into the atmosphere.

http://www.youtube.com/watch?v=NbzzWALPH5Y
^^ Someone else’s YouTube clip of being on the ride. Just picture it at night time in sub-zero temperatures. Hint: Gloves do not make it easier to grip on. Nor, surprisingly, does a lack of gloves. Unsure if it was the cold, but my hands just slid straight over the bars when I managed to get one glove off with my teeth.^^

Well, despite the pain in my arms (lots of pulled muscles on all of our parts) the ride was fun and it seemed to go for AGES. The worst bit? On the next ride, the ticket dude decided to get on and we stayed to watch and take some video. I was all like “Woah, he’s pretty badass. He’s not even sitting down…” and then just watched. The ride began and the dude just leisurely strolled through the middle as the ride was going. Not once did he seem disturbed, until a boy literally fell on him. At one point, I shit you not, he stood on the seat with one leg up on the railing, and at another point, he began to run laps in the centre as kids were falling off around him. Sort of like the guy below… or really, it could be the same guy…

http://www.youtube.com/watch?v=Ue8qtK_IF2E
^^ Totally showing everyone else up.^^

From there, we wandered into a few shopping malls and finally found out coat of choice! (This was both easier and harder than you’d think- it was easy because we weren’t really that picky, but hard because most were way more expensive than we were willing to pay and didn’t fit me. As it is, I won’t be reaching above me in our new red ranger coat. Ange doesn’t yet know I’ve dubbed it the red ranger, but he’s staying that way. On the way out, we saw a dance performance, by a group of young Koreans we quickly realized were intellectually disabled. It was interesting and a little uncomfortable- some of them were great dancers but some were… well, what you’d expect from someone who is slightly more severely mentally disabled. People were laughing, and it was hard to tell whether it was in joy and support or just plain laughing at them. Either way, they danced to some of our favourite songs, and two of the girls were quite good, as well as a shy boy who looked a little bit like Kang Gary and did some breakdancing. Another girl was very passionate about her dance moves. From there, we hopped on the subway home and headed to Korean BBQ for dinner. 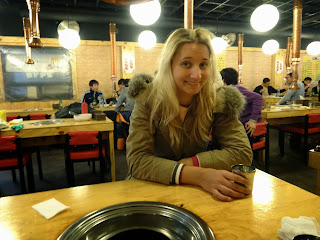 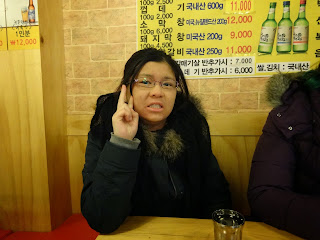 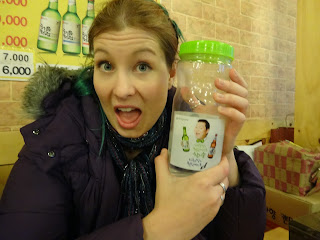 It was my first Korean BBQ and it went as well as it could have I feel. We got our beef, with a variety of side dishes, most of which were not to my taste- Kimchi, the spicy fermented cabbage, some sort of brown paste, a side of raw onion with raw spring onion, a semi-spicey soup of some sort. We then got beef and hunks of garlic to cook on the plate, Soju to drink, a side of rice and lettuce to wrap it all up in. I can say… Soju is horrible. It tastes like Vodka, only with half the strength. If you’re going to put your tastebuds through that pain, all I can say is… you want the full alcoholic content! So not a Soju fan! Also, the beef was okay. It is, by nature, pretty fatty in Korea but the two pieces I had were okay. Garlic chunks were… a mistake. I spent the whole time being paranoid about fat in the steak and then bit into garlic strong enough to make my eyes water. It was very, very garlicky. It was lettuce, beef, rice and a thick slice of garlic and it was- good for one taste but never gonna be a personal favourite. 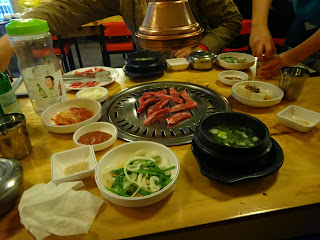 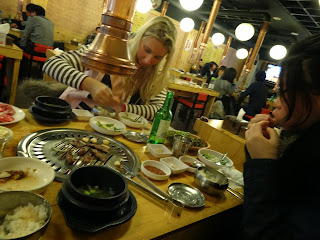 The chopsticks they used were also odd- they were metal and shaped quite differently to other chopsticks I’d used and I had significant trouble picking things up. Just when I think I get the hang of it… (I was boss at the Asian restaurant the other day. Black pepper beef for the win!). Then we headed back to the hostel (which is very nice… I have one thing to say and that is “heated floors”. 2 nights ago I actually just lay on the floor like a beached whale trying to warm up, but since it’s been snowing I’ve been triple pants-ing it. 2 layers of thermals before any actual pants happens- and this is with knee high socks underneath! Unfortunately, I have one great pair of themal pants and one terrible pair that just slides down awkwardly and drags my pants down with each step. These layers as well as the coat have served me well- I had my first slip/arse up on ice this morning and hardly felt it.) and went to bed. 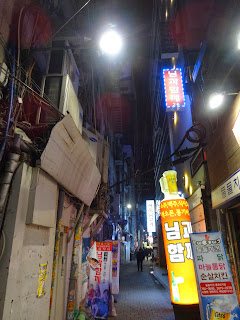 Tomorrow, we are going to Nalina (Go Crazy) and Nilili Mambo for Block B! We’ll Tell Them that they’re Very Good! (I am pointedly excluding “Freeze” here, for any K-Pop fans). Also , BTS, which Mankee is super keen. WE ARE BULLET PROOF! (Pt 2)
Anyhow, tired now, will update with photos tomorrow. xx Red Ranging Purple People Eater 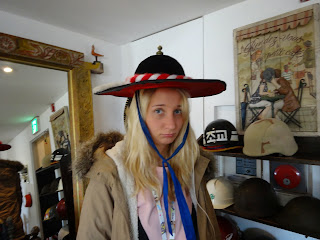 ^^ Angela, trying on a variety of hats at the Coffee Prince Coffee Shop. ^^
Posted by Carly V at 7:11 AM