It was one of those days where you kind of wake up in a lazy mood, not really feeling excited for the events you’d already planned and would much rather stay in bed all day and read a book. However, it is also one of those days, when it does turn out to be worth getting out of bed for…

The morning started with the usual routine of Carly sleeping in, and myself getting ready and (unsuccessfully and not so quietly) sneaking out and sitting in the kitchen with my laptop, cup of tea and bowl of oats (thank you import store!). We had planned the day before to go to pool at 11am... so by 12pm, we had just started leaving JF house for 40 minute walk to the pool in 37 degrees/80% humidity. 15 minutes into the walk, it felt like we were already in a heated sauna. The pool we went to was in Nagai Park, which has a famous stadium and park surrounding it.

We were bewildered by the signage which was in Kanji only (the really difficult Japanese characters) – this led us to a bicycle park…so we ignored the Kanji signs and arrows and followed some other people who looked to be heading towards the pool. Finally locating the entrance, we were stumped again when we realised you bought your tickets through a machine which, you guessed it – was in Kanji only!!! Looking suave, we pretended to be waiting around and watched some people come up to use the machine and see what buttons they pressed. Luckily, our friend Linda had been to the pool on Monday and mentioned it was 400¥ to get in. Taking a wild guess, we just put our money in and pressed the button with 400 written on it. Sweet (we thought) as the ticket popped out at the bottom. Now all we needed to do was walk in, give the ticket to someone and hop in the pool right? Wrong. This is Japan people!

We entered the foyer of the pool, and were directed to give our tickets to a man standing behind a small desk. He took the tickets then, as we went to walk off, placed a sign in my hand in –KANJI. *twitch* Carly and I both muttered “Wakarimasen.” (I don’t understand.) So, instead he pointed to my backpack and checked it, then asked us “Beer cans?” or “Big Beach balls?”, neither of which we had, so we were allowed to go on our way. . At the end of the hall we were met with 4 paths - two to the left, two to the right, all written in KANJI!!! We took up the bewilderment stance once again as we watched people enter all different doorways. Luckily, after a minute or two, a lovely old man was kind enough to tell us in his minimalist English that to the right was the indoor pool, and the left led to the outside pool, with the door closest to us being the women’s change rooms. As we entered, we were confronted with naked toddlers and naked women around every corner of lockers. Averting our eyes, we picked out a locker and finally headed out to the pool. On the left we had the toddler’s pool, which was ankle deep. Next to that was the kiddies pool, which looked to be about knee deep and also had two slides (as pictured) 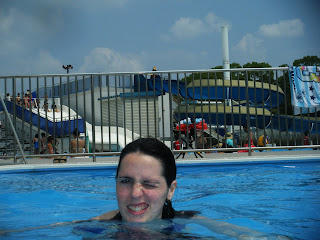 Last, was the ‘Adult’ pool - standing at 120cm deep and coming up to just below our waist at its deepest point. Heading straight into the water, we found it to be almost as hot as it was outside and more like a bubble-less spa rather than a refreshing pool. It was packed with people who were frequently bashing into you, which made me feel like I was part of a pinball machine. 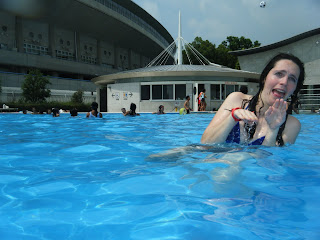 At one point, the lifeguards said something in Japanese a few times we realised that everyone was climbing out of the sides of the pool so we decided to try and get into the inner pool. This was achieved with little success as no one was in the inner pool either; and everyone who was standing along the side of it were all old men in budgie smugglers and high topped short shorts. Back in the outdoor pool, we managed to take a few horrible photos of ourselves before being told off by the life guard that photos weren’t allowed (our bad!). 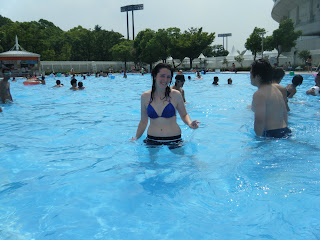 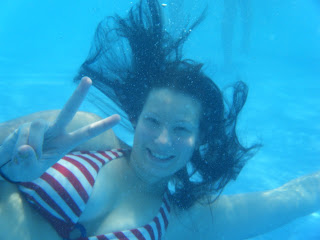 We left the pool at 2pm to go get ready to meet Yoshida-san at 4, ready for our adventure to Osaka Castle. Amazingly, we managed to find the right train after asking a couple of people if it was indeed the train to Osakajokoen (Asking where to go places is probably the only full sentence I know in Japanese and has come in handy quite a lot lately.). We made it only 5 minutes late, which was a definite record for us, and met up with Yoshida-san and her best friend Noriko. Yoshida-san surprised us by getting us tickets to ride on the Train car to the entrance of OsCast. It would’ve been a 20min walk otherwise, and I don’t think our feet could hack much more after already walking 40min to the pool and back in the raging heat. The castle is surrounded by a huge mote, which we thought was pretty cool considering we’d both never been to a real castle before. The base was infested with wild cats that MongKitty probably would’ve be proud to have as family. I took a few shots of them as a shout out to Loris, who I know appreciates cute animal photos. 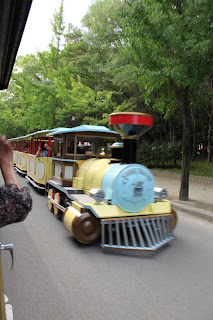 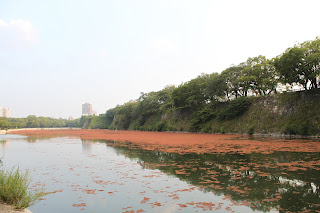 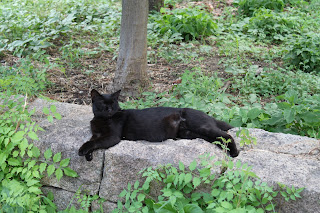 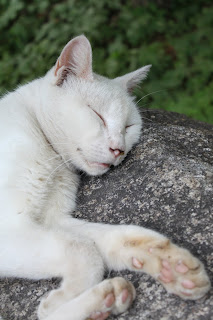 An albino asleep - with giant paws! These feral cats were everywhere, but they are quite friendly, and live right by the moat. 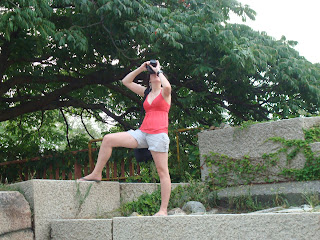 Saros the Photographer at work.

They were still setting up the candles as we made our way up the hill through the castle’s garden’s and paths towards the centre where the castle stood. Unbelievably, Carly was right when she said they might have Frozen Coke at the castle which I was pretty excited about, as these ones were large AND had ice cream on top. In the heat, it made it that much better! We headed into the Castle just as the sun was starting to set and were grateful once again as Yoshida-san purchased our tickets before we could argue. 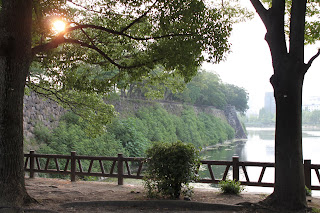 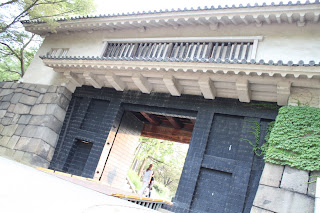 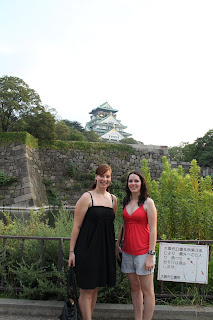 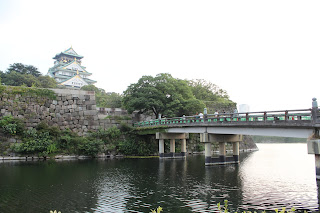 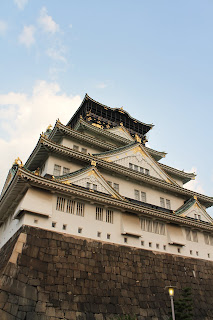 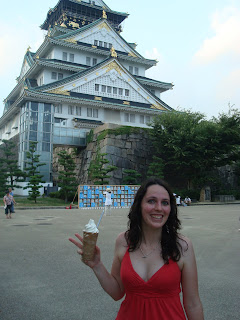 Osaka Castle was built in 1528; and in 1665 the main tower burnt down when lightning ignited the gunpowder warehouse and wasn’t rebuilt until 1843. The castle was made up of 8 levels – 7&8 being observation towers and the rest made of historical artefacts and stories. We stayed on the top observation deck until the sun went down – the city was shrouded in a humid mist and the whole effect was both creepy and cool at the same time. We had a good spot on the deck that looked over the candles in the garden, enabling us to get some pretty good birds eye views of below. 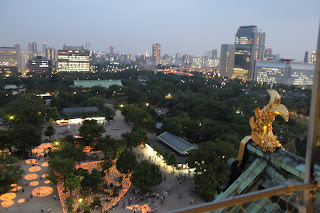 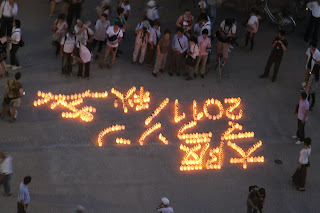 These candles made out a design of a running man and were about a large marathon that will be held around the castle in 2011.

We headed down to the lower levels of the Castle where we read all about the wars that went on at Osaka castle - the two major ones being the Battle of Sekigahara and Siege of Osaka. 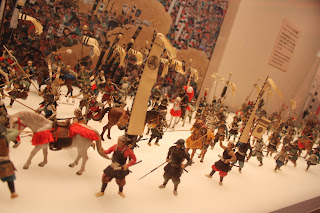 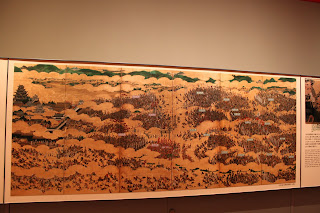 I didn't actually read what most of the plaques said...but Wikipedia has some great information for those that do want to read up the history further. The old war uniforms were very interesting though, and ranged from beaked-masks to bear fur full body armour. I think the best ones we saw were these, they were so lively and fierce! These were also the most popular with both the Japanese and tourists visiting the castle: 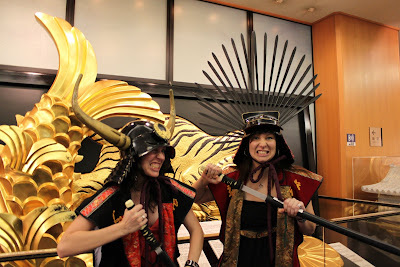 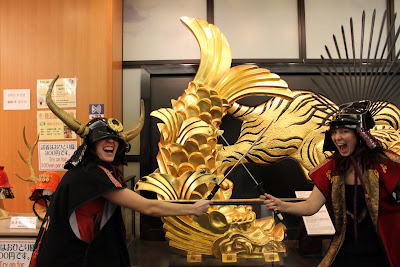 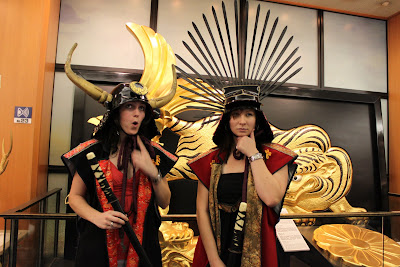 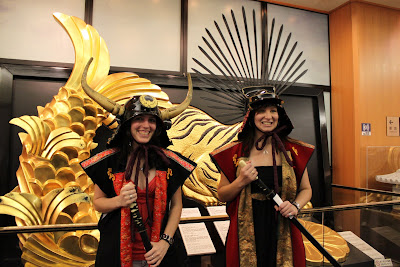 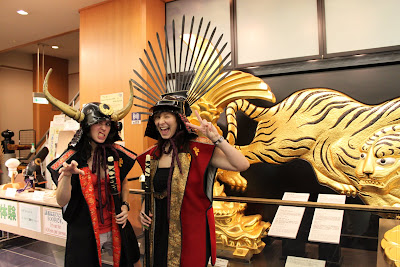 As you can see, these ones were definitely the best in the whole castle. Simply breathtaking! The castle was starting to close up so unfortunately we had to leave the brilliant war suits behind and head down to the candle lit gardens, stopping to get some more shots before leaving to go and get dinner. 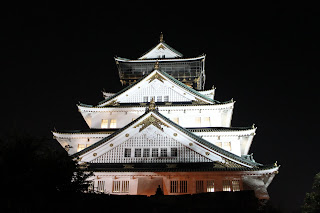 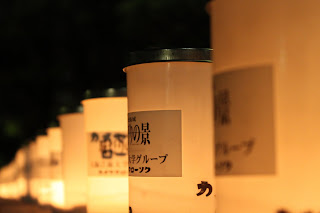 We headed to Osaka Business Park where we had been on Tuesday to vote and went back to the first floor of the IMP building to have a look at the available restaurants. We saw Ange's Cafe again with the delicious Crab Claw Pasta, but thought we'd have a look at what other restaurants were available (thank god!) I went ahead and found that they had an Italian restaurant which I not so subtly said we could go to, unless there was somewhere else they'd rather. Unfortunately for us, the Italian place was no longer serving, and Noriko wanted to take us to a Okonomiyaki Restaurant (yay...). The last time I had it...there had been octopus in it... but as Yoshida-san was shouting us once again we could hardly refuse, so with a slight twitch and Barbie smiles, Carly and I followed them to the restaurant where we found out the food is brought out half cooked and finished on a large hotplate set into your table.

Luckily, we managed to find a safe order of French Fries to share, Pork Yakisoba, and Noriko also ordered a vegetarian Okonomiyaki for us to try. 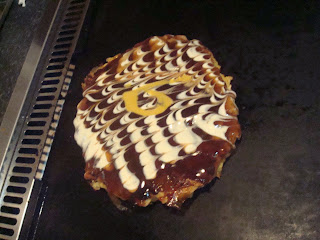 As predicted, the fries and tomato sauce were awesome, the Yakisoba nice and tasty as usual and believe it or not, I actually liked the Okonomiyaki and Carly didn't MIND it, but didn't really like it either. 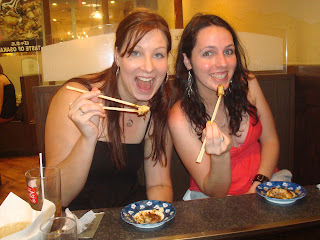 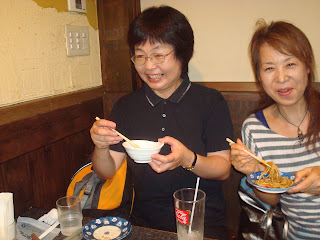 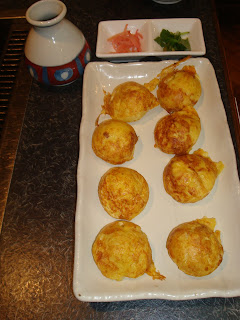 Yoshida-san knew we didn't like it, and had her iPhone out ready to film our feeble attempts at eating the Japanese delicacy. Which went something like this:

Notice Carly's does almost return the octopus back to the sea of soup in the bowl. I would say she did quite well, and I don't know if this was an eating tactic by her, but kudos none the less - breaking the ball before putting in your mouth - brilliant idea Carly and I resent you for your smartness!!! The next attempt from me, is a little more subtle, you need to watch the signs here - as you see, when it was my turn, the waitress who had brought them out was standing and watching me ready to eat it. So in order not to embarass our guests or the restaurant I had to put on my best attempt to like this dish.

What you see - Sarah enjoying a lovely ball of Takoyaki, it went down smoothly and 'it wasn't too bad!' with a meer shrug. Now let me tell you, I don't know what was going through Carly's head, but this is what was going on inside mine - shit, everyone is watching. shit, the waitress isn't leaving. Ok, it's just egg and octopus - dip it in the soup and into the mouth and Oh my god EWWW - smile - smile- shit! Just swallow, don't chew, noooo don't chew the octopus, stop, breathe, ohhh it tastes soo bad and warm and...just swallow whole...and... done...oh dear god never again .SMILE! and Thumbs Up! The waitress was happy and walked away, while my stomach was still spasming with the contents. To put it as nicely as possible, the egg was LIGHTLY cooked on the outside. So putting it whole into my mouth and biting down resulted in an explosion of warm gooey, fishy eggy crunchy octopus YUCK. I hate runny egg by the way, so, now look at the tell tale signs of my inner horror - the squinty eyes, the hand to the mouth. Such a horror.

The rest of the night went well however, we caught the subway home and relaxed on the roof to stare up at the non-existant stars and talk with the JF Crew. You guys WISH you had roof couches, but instead of just being jealous, we'd love to hear your comments ALL about your jealousness.

Much love and Takoyaki. Saros out!