Despite having no particular enjoyment of Sushi on my part (and Saros only liking Chicken Sushi), we were alarmed and excited to be invited to the equivalent of Sushi train. We ate before we went (tacos were pretty successful) and had to wait 20-30 minutes before we got our tables. We had two tables, us, Linda and Oh*, and Nicolas, Ayumi, Fumio, Sebastian and Anthony.

The Sushi drifts around on plates on a conveyor belt next to each table, but you can also place an order on the Shinkansen (bullet train). The Shinkansen is way cool, by the way! Oh was quite enthusiastic, reaching for all manner of slimy goodness while I eyed the desserts. The plates are colour coded, red and white for fish and rice, yellow for sushi or other things with rice, and green for drinks. (Green tea is free and is on each table, but there are orange and apple juice boxes on the green plates which I took advantage of). 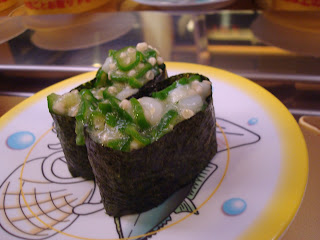 ^^ Some sort of slimey green thing ^^ 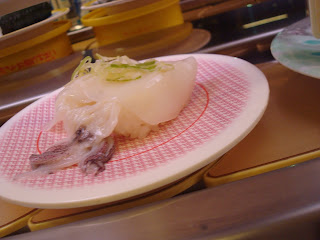 
We had cucumber Sushi (I really don’t like seaweed), some kind of crumbed chicken or pork with rice which was pretty good, chocolate mousse and chocolate cake. It was about this time we probably abandoned all sanity, as we decided to make my dad proud and everyone of our friends laugh, and try some fish. Not just any fish… we tried this: 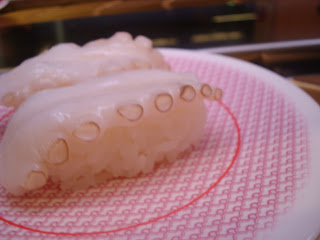 It was a war between us and the Octopus. It was really, really bad. It tasted rather strongly, and made the rice underneath taste of it also. It was inchewable… well, maybe you’d better see for yourself what it was like…

Yep, that’s me almost vomiting about 9 times, and Sarah almost snotting up the place in her distress. After that video ended, I was still trying to swallow the damned Octopus! Beno, we’re saving the Takoyaki (fried Octopus balls) for Tokyo, so bring your game stomach!
If you love me, or pizza, or pants, you should comment ;)

P.S. As to who won the war? We may have won the battle, but the Octopus won the war. The Octopus always wins.
P.P.S.
* Oh, aka Oh-san is the J-Hoop of Japan. He’s always super nice despite a rather tenuous grasp of English. Lovely guy. And if you were wondering, his name is actually “Oh”/ “Sang Min Oh”.
P.P.P.S.
I don't know why Fumio's being a minger in the photos, he's generally supposed to be a ladies man, not a mutant!
Posted by Carly + Sarah at 7:06 AM