On Friday, we were organising some stuff for work when Juerg invited us to walk down to Nagai Park with him. It was about a 20 minute round trip, and after we got about half way there, it started to rain! The rain was not very cooling, and I was dying (both in my head and verbally... by verbally, I just mean that I whinged the whole way there and back... "It's so hot... milk was a bad choice!). We did stop to see our local Hyaku Yen ($1) shop, though it was like, $1.05- jeez, price hike? 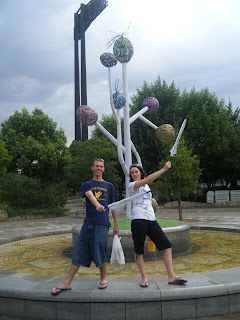 ^^ Saros and Juerg posing- this... thing... whatever it is, shoots out steam (unfortunately hot, not a refreshing cold mist) every 10 mins. ^^


We do most of our shopping at the $1 store, they're really cool. This one had more food than the other's we've seen and we spent a bit of money! Juerg bought fireworks. Nagai park is huge, and there is an inside garden that you pay to get into. We'd just gone for a quick walk, so we didn't go in this time, but we found the pool complex which looked horribly refreshing (I say horribly because we didn't have our bathers and it was about to close... so we couldn't use it!). We did a lap of the park (including having some fun on the playground) and walked back to J&F Plaza for our cocktail night, which for me at least, will now be The-Night-Which-Shall-Not-Be-Mentioned. 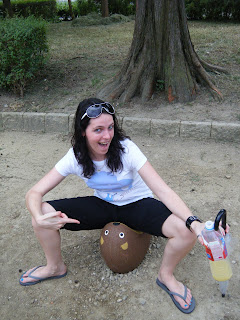 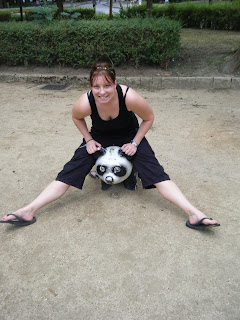 It began with bowls of punch and ladels, fun music and Cal Kings. Nicolas started singing, this guy called Chris convinced everyone to play Titanic (beer and various other liquor) and Nicolas, Chris and Linda had to drink. (It looked truly disgusting). Then Juerg decided to set off his fireworks- there were some cool sparklers, Nicolas, Sarah and Linda had some fun with a trolley and then one firework made a rather loud bang... then we got told to come back inside :( 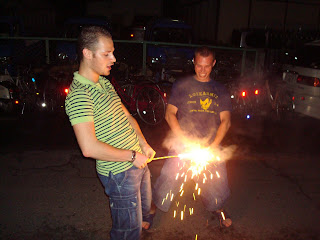 ^^ Being responsible with fireworks ^^ 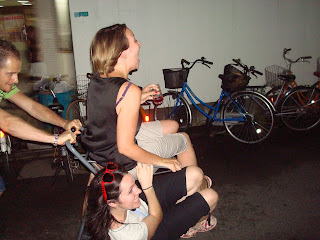 ^^ Nicolas, determined to push Sarah and Linda into a row of bicycles. ^^

We then turned the J&F Kitchen into a disco and somewhere along the line I made some sort of punch that probably was akin to paint stripper (Sarah said it was disgusting but Juerg and I continued to enjoy it) and we danced! Sarah got the great idea to make pancakes, and Nicolas and Ayumi decided to help. Linda also helped, by pouring so much brandy into the mix that the pancakes tasted purely of brandy. 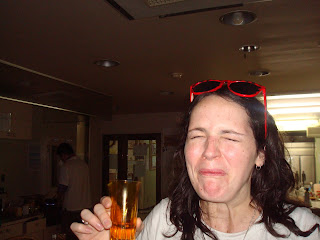 ^^ Linda gives Sarah a shot of Sapphire Gin to drink. Sarah responds favourably to this suggestion. ^^ 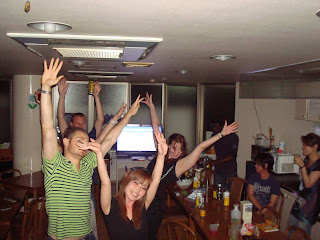 
By the time we went to bed, I was very, very drunk and the next day, I felt very, very bad. Sarah was a mix of a little sympathetic and a lot amused. I felt quite horrific on Saturday, compounded by the fact I knew we had to meet Chizuko and see the fireworks! It was a true act of heroism on my part that I didn't just expire on the spot. 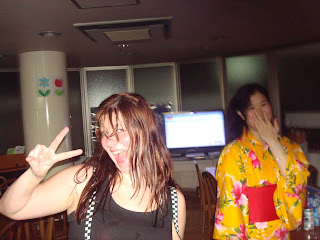 ^^ This was taken before the paint stripper punch was poured. I now leave you to imagine my state the next day. ^^

Naturally, we understood none of this (Chizuko translated sometimes for us). Miho was home sick and missed out- Sarah and I were really glad we went. We knew we were going to watch the fireworks from Chizuko's brother's office, which was actually on the 21st floor of the Umeda Sky Building, which we will be going to. It's a very tall observatory, with an elevator ride that looks incredibly frightening to someone with a minor fear of heights. It will provide me with unlimited and incredible fear, but I'll go anyway, because it looks too cool (and horribly, horribly high) to miss out on. 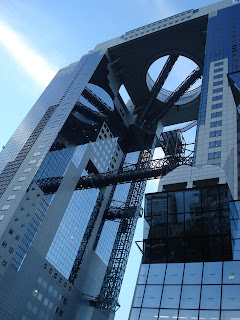 The last fireworks show we went to wasn't that impressive to us- It was hot and uncomfortable wearing Yukata (awfully so), we'd had to walk for ages to get there, the fireworks went for an hour and a half with 5 minute bursts then 5 minutes off, which was weird, had fireworks we'd seen before and we were just tired and over it. The 21st floor had an absolutely incredible view. There was a mountain... eh forgot it's name, dead ahead, and a view of the river and the ten or so bridges over it. The sun was going down over the mountain, and we could see most buildings and parks. It was a wonderful view, unlike anything in Adelaide. 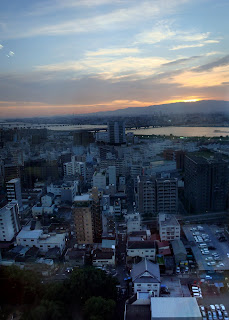 We had proper seats, and the building was air conditioned, which was already an improvement from the last fireworks. We met Chizuko's family, who were really, really nice. Her brother has just gotten a promotion, and Chizuko showed us the desk system. Closest to the windows are the supervisors, then another table where the higher rank sits closest the the window. Further away is another table, and furthest of all away is where the starting employees sit. Chizuko's brother is now just one step away from supervisor! We met his wife and daughter, who seemed shy of us, and Chizuko's sister. They were amazed (and a little dubious) about our Allen's Snakes Alive, which were amazing. Chizuko brought Yakisoba, Ominomiyaki and Tempura, which I declined (citing food poisoning as my reason, rather than incredibly awful hangover) and Sarah mostly enjoyed... Sarah said the Tori Tempura tasted like KFC and enjoyed it immensely. 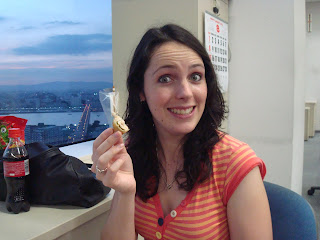 Night fell, and the city below us lit up. We could see police cars parked on the bridge below directing traffic slowly. Then all of a sudden, the fireworks started and someone flicked off the lights. I wasn't expecting much, but it became clear that this show was far superior to the last. The fireworks were set off from a barge parked in the middle of the river, and were dazzling. There were fireworks we'd never seen before, including gold fizzling fireworks with rainbow colours- pink, green, purple and orange all at the same time. There were smiley faces and hearts (the hearts were always upside down though), cats, fish and squid. There were stars and what looked like Saturn, fireworks in contrasting colours and fireworks that were low and went sideways over the water instead of into the air. Sarah regretted not bringing her proper camera, and my camera overheaded and the battery died well before the show was over (though I had been filming for about a half an hour, not a bad effort). The show went for about 50 minutes non stop, and everytime there was a beautiful firework, everyone on the office floor clapped or went "Ooooh/Wow/Sugoi!".

By the time we left, both Sarah and I felt far improved and enjoyed the Umeda Sky Building (even the toilets had windows with a great view!). We had been a little confused as to why Chizuko's brother kept describing his company as "Sexy". Sarah and I just smiled politely, wondering how that made sense (I commented that the visitors stickers here actually stuck (unlike DECS visitors stickers... those things just roll straight off. This was the right thing to say, as her brother's company manufactures the glue on the stickers! SEXY!)
It wasn't until we were in the lobby when it hit us like lightening... We looked on the wall and saw the company's name was "Sekisui" which, when said fast and slurred (everyone was drinking to the fireworks), sounded remarkably like "Sexy". We laughed for a long time about that one.

The walk back to our train station was interesting, and instead of buying a ticket each time, we bought a Kansai rainbow card for the subway. We put on $10 and it just subtracts your ticket cost each time.Feeling better (and in my case, hungry), we stopped for a cheeseburger at Tennoji and then went back to J&F Plaza where Sarah was keen to get to "The Girl with the Dragon Tattoo". I've been "letting slip" some misleading information about events, so she thinks she knows what's coming. Yep, every "Have you got up to the part where..." was bullshit, Sarah. You can thank me later for not spilling. Now I have to set up my lesson for Yoshida's classes (just got the info and am feeling apprehensive!) so sayonara for now!

P.S. The Italians did move out, thus have not been disturbing out sleep. They apparently come back occasionally to visit one of the other Italians who didn't move out. They're staying in a hotel at the moment.
P.P.S. Dad, please tell Nanna V the tissues are coming in very, very handy.
Posted by Carly + Sarah at 8:41 PM