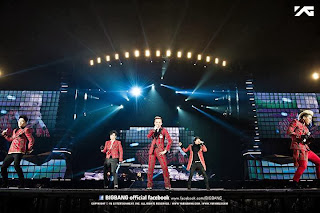 Getting into Tokyo was undoubtedly tiring and rather unpleasant. We’d talked about getting the NEX (Narita express) to Tokyo (as Narita is about an hour away or longer depending on where you’re coming from) but then Ange and Mankee thought about other options. It is a more expensive, luxury option. At this point I was all “Seriously? If you had a different idea, why not find out BEFORE we land?” I was pretty over it (we all were) which made for a bit of a downer. It was also stressful because I couldn’t connect to WIFI and we ran late- we were supposed to be meeting my friend Yuki in Tokyo. (I met Yuki in my Dip Ed course at Uni). 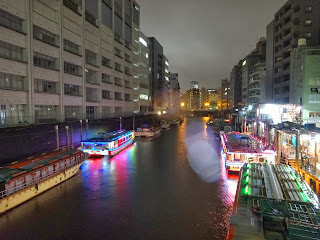 With my super-mega-awesome map reading skills, we made it to Khaosan Ninja Tokyo Hostel (which, as a side note, we may or may not have chosen purely because it had “Ninja” in the name and we wanted to “go have a Ninj at someone” (to quote a very amazing fanfic) but to our great distress, we later realized we did not make reference to that quote- or any ninja quotes- at any point. Wasted opportunity. Am kicking self.) to find Yuki waiting! I was so happy/guilty, because I suspect he’d been waiting for a while. He helped us lug our bags up 5 flights of stairs (and to anyone who has seen Ange and my cases… they’re huge. 23 kilos and time to send some shit back…)  then we headed out to dinner. 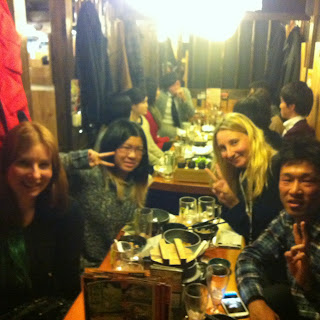 
After a little searching, Yuki suggested a 280 Yen restaurant, which was amazing. Everything was 280 Yen, which of course seems so cheap… so you buy lots… and you spend lots. Still, it was worth it. I tried some Yakitori-don (Rice with chicken pieces and an egg and soy sauce with strips of nori (seaweed) but it wasn’t something I adored. The Tori Karage (fried chicken, not unlike larger chunks of KFC popcorn chicken) was amazing, they had chips, and they had most importantly- a range of Cassis. Yuki and I enjoyed Cassis Orange, Ange had Cassis Pineapple. Cassis is amazing- truly. 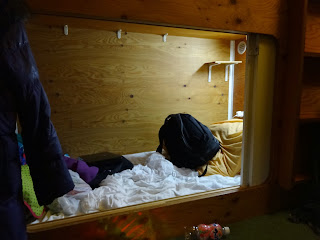 Then we headed back and met our dorm mates. Our dorm had “deluxe cabin beds”. Before staying there, I had no idea what the fuck they were. However, they were amazing! So cool! Anyhow, our bunk mates were also pretty cool. Keegan and James were from Canada and both into games. Like us, they were buying up way too much, but in Keegan’s case it was Japanese games he was ecstatic over and in James’ case, some dubiously clothed figurines.
There was another Australian named Kousa (?) I think, who was in the Navy and headed to London the morning we flew to Osaka. (Also, there was this guy who just glared every single time I saw him. Like, in the bunks- looking dour. In the hallway, gaze could fell an ox. I even saw him on the street, just looking like he wanted to destroy the world. He never said anything, just looked sullen.) 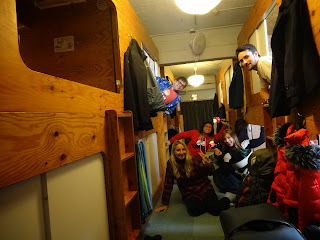 The next day, we met Yuki and walked around Akihabara for a bit- awkwardly the first shop we walked into was less of a normal manga store and more of a perverted manga store. We worked this out after 6 floors of scantily glad comic girls and unrealistic cleavage. We got ramen for lunch and I had egg noodles with a dipping soup that, while never going to be a favourite, was tolerable. Then we headed back for the afternoon. I packed my stuff the day before so that I could take my suitcase downstairs and leave it there overnight. Because we were leaving early, I didn’t want to wake everyone up banging my suitcase into the walls at 7am. 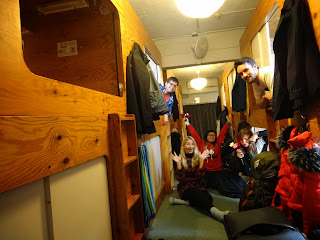 Mankee and I spent the time before Big Bang chatting to James & Keegan, while Ange slept… by the time she got up and got ready we were slightly late for Big Bang. After figuring out where we had to get off (Suidobashi) we headed to Tokyo Dome. From there, it was not hard to find as we just had to follow the crowds of girls and Big Bang product stalls. 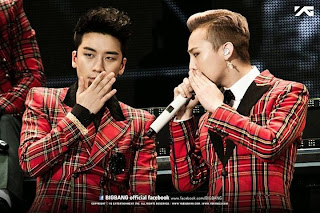 We lined up for a while to buy some stuff but the headband Ange and I wanted was sold out. Thus we spent $18 on giant Big Bang mallets (Could there be an uglier light stick?) and I bought a bag. An oddly sized, zipless bag, it turned out. Still, I know in my heart Big Bang will love me for wasting my money on their crap, Right? RIGHT? 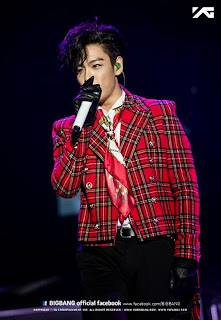 From there, we headed in. Our seats… were not great. We were right on the side, so when Big Bang were in the middle of the stage we couldn’t see them, and we weren’t close to the front either. Still that is to be expected with a concert the size of this one! When Big Bang songs started playing in the leadup to the concert, the reaction was pretty amazing. All the fans were united in singing along and waving the light-up mallets. 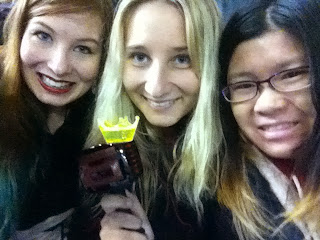 ^^Ange is holding the lightstick-mallet.^^

Then after a few false starts, (and I could count “Winner” to be a false start… not really convinced by their work) the concert opened with Haru Haru. My favourites were Haru Haru, Gara Gara Go, Blue, Tell Me Goodbye, RingaLinga, Doom Dada, Tonight, Sunset Glow. 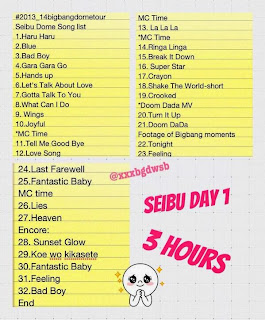 ^^Tracklisting courtesy of someone on Twitter. I suspect all Domes have the same tracklist, because despite this not being from Tokyo, all the songs were the same. Also, their Encore was seriously like 5 songs. It was ridiculously long, and for some reason, doubled up a lot.^^


All of the Big Bang members were outstanding and they all are obviously used to working a crowd. I love GD’s confidence, TOP’s “mysterious/serious” looks and random aegyo (He seems to have only 2 forms: “wooden” and “cute” and abruptly flips between both with no middle ground), Taeyang did his “I’m gangsta… yeah yeah” act (good try ‘Sol’), Seungri’s smooth banter but for me, the standout was Daesung, who I fell a bit in love with. He’s always so happy and I fondly remember the “dumb & dumber brothers” moments I’ve seen of him with Jaesuk. 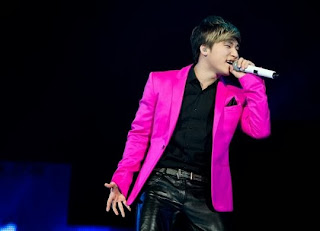 What can I say? The performances were great. Big Bang owned it- they were clearly well seasoned musicians, relaxed at MCing during costume changes, being cute, paying each other out (whenever they’d finish their individual songs, the other members would start quietly singing it as they trooped back on stage- it was cute/funny and often lead into other little skits). I really wish I’d been able to understand what was going on because I suspect it was quite funny- even without knowing what was happening I was thoroughly entertained. I know they were paying out Taeyang a bit for his shitty Japanese- everyone but Taeyang seemed super confident holding casual conversation in Japanese though so I guess their language lessons paid off! 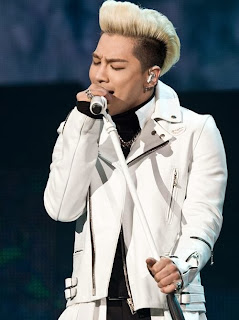 ^^ Like his hair, Taeyang's Japanese sucks. And who calls him Sol, seriously?^^


Of course, they did their individual sets- Seungri with “Let’s talk about love” (a bit average) and “Gotta Talk to you” (which I was really hoping for so I was ecstatic!), then Daesang with a pretty upbeat number (we were worried he was going to do a ballad. He has such a fantastic voice but often does ballad songs. Ange loves his trot songs.), Taeyang with (according to someone else’s tracklist) Break it down and Ringalinga. Ringalinga, of course, was pretty epic. GD was next with Crayon and Crooked (I’ve never really loved crooked) and finally TOP with Turn it Up and Doom Dada. TOP was surprisingly good- we were all surprised he could actually do his own rap, Ange most of all. 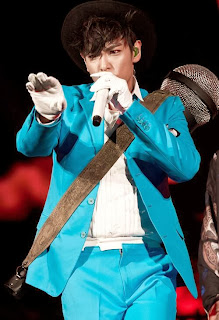 
This concert was a much longer one (*cough* 3 song-WAPOP! *cough*) and I got really tired of waving my mallet in the air. I have puny, weak arms and the constant motion strained what little muscle I had. Still, first world problems ey? Classic example! I got told off twice for filming, but it wasn’t really an issue. It was disconcerting to hear the Japanese version not the Korean version, which may surprise non-Kpop fans. You get used to hearing certain sounds, an obviously the words, sounds and rhythm changes when they translate the song to a different language. It makes it harder to mutter along, even using nonsensical sounds! My arms were hurting and our view was really shitty, but at the same time I didn’t want it to end! It couldn’t really have been more different from the WAPOP concert in terms of feel and seating position. 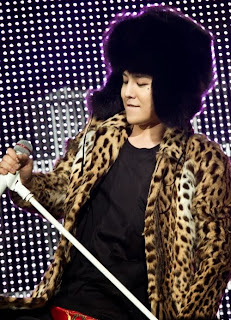 ^^An apparent example of 'fresh' dressing. Explains a lot about my style since becoming a K-Pop fan. ASSA, JOTA!^^


At last the concert drew to a close, but we noticed the fans didn't leave and the lights stayed off. Ange didn't think there'd be an encore, for reasons I can't be bothered listening, but we felt it couldn't hurt to stay. We then observed the security moving around and started guessing Big Bang would do a lap of the stadium in golf carts- we were close on the lap, but not on the golf carts! Big Bang had special bus/platform things that they came out on while doing what could have been the longest encore ever. And they were wearing Christmas stuff (Taeyang had a stupid looking raindeer hat and TOP was wearing the merch Jumper making Ange regret not buying one. 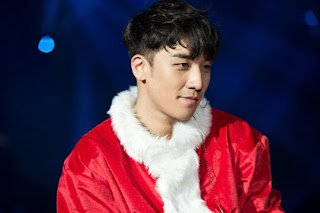 When we left, the area was still packed. The Sobu line is (according to Khaosan Ninja posters) the busiest service out of the whole Tokyo metro, so we thought we might as well head to a conveniently located Maccas. It was a long, wet shuffle out of Tokyo dome, filled with too many umbrellas (tangling awkwardly in my hair) but the Maccas was delightful and by the time we’d finished, Sobu had cleared enough for us to get on a train. We then headed back to tell James & Keegan about how amazing Big Bang was, took a few photos and headed to bed. 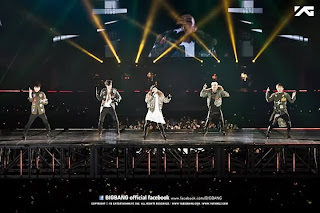 The next morning, we headed downstairs, got to the airport with plenty of time, accidentally almost missed our flight, then made it to Osaka! 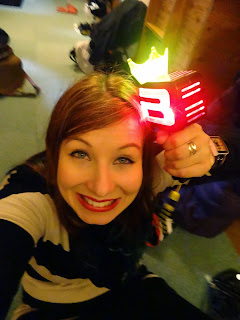 - VIP  Carly, who would have liked another bottle to add to the VIP/BBC/ ARMY/ Wul-Zico Shrine.