The flight from KL to Seoul was as follows: Take sleeping pill. Occasionally wake up, go back to sleep. I seriously almost went back to sleep until I realized we’d hit the tarmac in Seoul. Tablets worked like a charm! Breakfast was an unfortunately poor choice- I chose the omelet instead of the “local breakfast” and instead of separate bowls of rice and curry with an egg (I would have totally gone for hard-boiled egg and white rice!) I received a semi-cooked looking omelet topped with peas, a tomato, a sausage and disarming HOT wedges. There was nothing to suggest these wedges set your mouth on fire, but set my mouth on fire they did. In the end, I ate my bread roll and my yoghurt and was thankful for those. 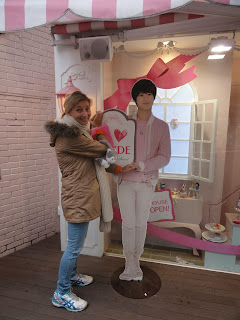 ^ Angela and Taemin, just chillin' out the front of Etude House.^

So then I disembarked and took the AREX in to Hongik University.  There were two options- “all stops” (which I needed) or “express” (straight to Seoul). Buying the ticket was easy enough but when I tried to check with some lovely older ladies if it was “all stops” they looked very confused. Trying to say “Hongik university” only brought further confusion (I was pronouncing the G, it’s a soft g like in song but still- does it sound that different?) so I pointed at the stop and then they nodded. I was still very relieved when the train stopped at the first station! 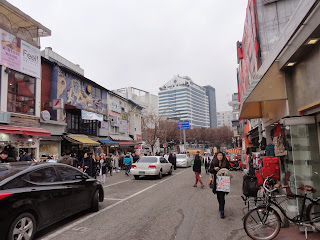 The trip was interesting- it was 7am in the morning when I landed and there was a lot of fog/mist. Surprisingly (to me) there was a lot of marshland between Incheon and Seoul.  The friendly ladies who had helped me nodded at me as they got off the train and then I got off at Hongik. It was there we hit our first spot of trouble- my printed instructions from Angela had been revised- she told me which exit to take from Jongno Sam Ga but not from Hongik. She said she told me on Skype to take exit 1 just before I got off Skype in KL but I think I might have logged off Skype first? Anyhow I sent Ange a message reminding her I didn’t know which exit, aimed for 9 (which ironically, was next to 1) found Mankee, then Mankee said Ange had gone out to find a coffee shop with WiFi to tell me the exit. I tried to get back on Wifi but now I had to pay, only I couldn’t understand the Korean to pay. So I sent Angela a message on her phone and tried to ring her… only it told me her phone was off. 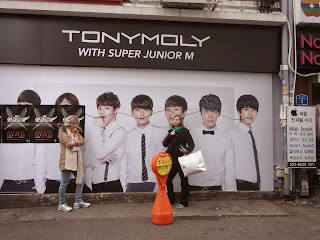 ^ Ange and I hanging casually with Super Junior M. Ange is posing as Henry Lau and I'm as Eunhyuk.^

After a lot of awkward waiting, Mankee decided we would go back to their hostel and luckily Angela had decided to return to the station to find Mankee at that time (she thought I got off at Jongno Sam Ga) so we met up. We were delayed, so headed back to their hostel so they could pack. We then left all our stuff (mine included) at the hostel  and headed out to do a short tour of Hongdae. Hondae was cool- and I got an equally cool coat at Uni Qlo. It’s a purple, non-shiny puffer jacket. I call it “Boysenberry danger” and “The Mulberry Defender” alternately.
Then we went into some of the makeup shops like Etude House, Holika Holika, Tony Moly, did a bit of accessory shopping (everyone loves headbands, right?),  had some ice creams at a shop Angela and Mankee enjoyed frequenting (I had Mint choc chip, Mankee had Orea and Angela decided it was finally time to try “Cheese”. Yep- there was a “Cheese” flavoured ice cream.  It was an interesting flavour). 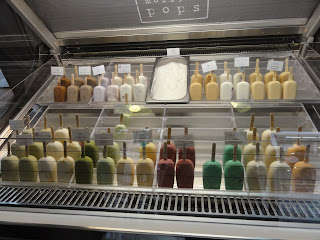 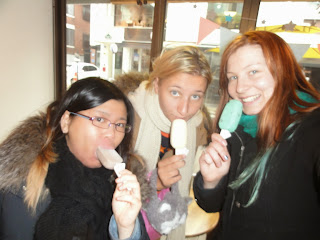 Then we ambled on to spot PIZZA HUT! Well, you know how I feel about foreign Pizza Hut! Just like Indonesia, it was the old, delicious recipe so I was delighted. After that we continued wandering, occasionally buying things and drifted past the EYK (Eat Your Kimchi- a very famous company run by Canadian duo Simon and Martina. They do online You Tube reviews of K-Pop and film information about living in Sth K.) studio. Mankee and Angela had already stalked it out and met Simon, but alas, neither Simon nor Martina (Nor Soo Zee) were present in the coffee shop below.  At least I got to see the building? 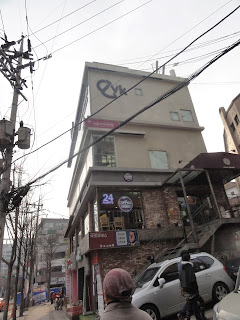 
After returning to Ange and Mankee’s hostel for our bags, we began an unfun trip to Jongno Sam Ga. I swear, I will have put on muscle by the end of this trip. What did I pack my bag with, rocks? Angela looked like some kind of hilarious hobo because she’d bought way too many incredibly weird Engrish sweaters that said things like “Charme” and “Smelly bear” which was a weird looking bear with a crown. This resulted in her stuffing them in plastic bags and tying said bags to her suitcase and her person. It was hilarious. When we got to “Stay in GAM” hostel, I was so relieved they had an elevator. There are not enough elevators in Seoul. Then we crashed for a while, before venturing out for dinner at Maccas. I had a very enjoyable Big Mac but was a little disappointed not to find more exciting menu items. (Maccas in Indonesia has soft serve with green apple and orange topping! I wanted to try the green apple but it was sold out so I tried Orange. It was nice, but very odd.)
Then we trundled back, buying some bread, marg, yoghurt and strawberries on the way back and headed to sleep. I was dressed in my furry pjs and my giant jumper and was out the moment my head hit the pillow! 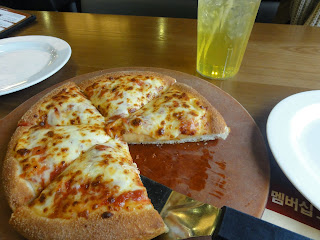 ^ My cheese pizza was amazing.^ 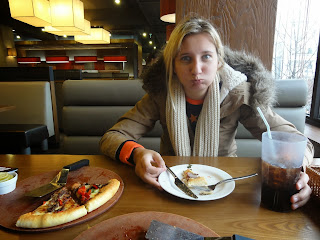 ^ Angela enjoyed her Bulgogi pizza. I did not. ^

Today we’re aiming for the Seoul tourist centre (to book our ferry tickets to Fukuoka & dress in Hanbok!), post office for Ange to post  things home and then possibly off to the palaces, at least 2 of which are just a short walk from Stay in GAM.
Boysenberry Danger- Out! 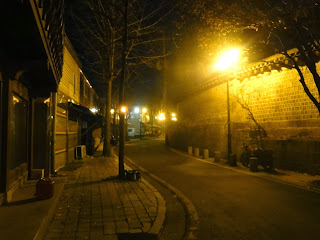