Hi all, Carlos Santana here. First off, I’d like to inform you that I am wearing the hottest green nail polish ever, a greeny-gold (more green than gold) that we picked up in Singapore. Yesterday and today were pretty chill, after having event after event in a row we decided just to do nothing, which was incredibly enjoyable. We woke up late (myself later than Saros), hit the showers then hit the net to surf. Sarah went for a walk to take photos and I caught up on an particularly exciting chapter of Meifu’s Gate, chapter 13 I believe. Meifu’s Gate is almost as good as cheese pizza, only less fattening and with plot twists that an all-seeing Bhuddist Monk living on top of a mountain couldn’t forsee. Make what you will of that. Anyhow we just did nothing all day then headed into the kitchen to make Spaghetti. We didn’t want to attempt meat so we got a tomato and garlic sauce. We also made garlic toast, which was good, in a strange way- sort of half soft and half crunchy, patchy looking and a little too sweet to be entirely delicious, but for our cooking and being in Japan, it was wonderful. 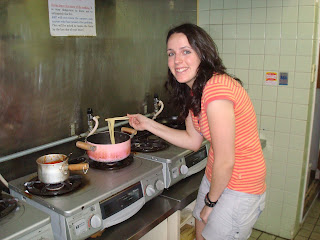 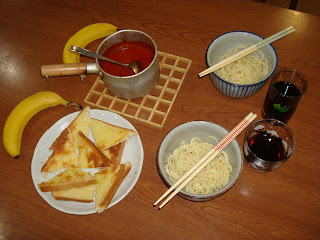 Then we played cards in the kitchen which grew to be an event- we taught others the memory game including Ayumi, SuperCoolRainbowHairMan (he has bleached blonde hair with wicked patches of blue, green, yellow pink and purple), and Fumio. Then another girl- YouthOrganisationMexico girl (who is actually Japanese) got me to help her with her English for a job application of some sort. It was just like being back at school. It was kind of good, but I kept getting distracted by the tv and the card game next to me. 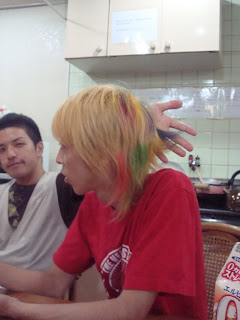 
The TV in Japan has some fascinating shows- usually we have only the vaguest idea of what is actually going on but there seems to be this show where they just show the contestants really really weird stuff. For example, one of the videos they showed the contestants (who always gasp and look surprised/horrified/gleeful) was a man and a black Labrador competing to see who could lap up a bowl of water faster. It may not surprise you to know that the dog won. Another was a dish that was some kind of rice, a disgusting looking meat and/or mushroom sauce, then literally a tower of cabbage on top akin to Marge Simpson’s hair. Then there was the giant fish shaped pancake (probably had some sort of mystery contents like bean paste), the quite tall man doing the limbo under about a 10-20cm line and the super sweeper. 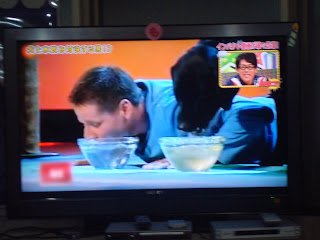 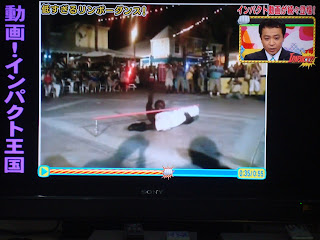 These were the only ones I actually got a photo of in time. Then we continued playing cards- Nicolas showed us two card games, a complex one that went on for ages (SuperCoolRainbowHairMan, Sarah and Fumio did okay, I was out first and Nicolas second. I really, really sucked at it and Fumio eventually won). Then there was another game similar to snap, I thought I was heaps cool, but it turned out the only reason I won was because I had a key attached to the hair tie on my wrist. The key kept smacking the table and distracting Nicolas- when I took it off, I lost big time to everyone in sight. We played a while then retired and watched some Glee- it took a while to get to sleep because some jerkasses kept talking. 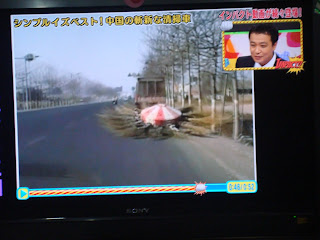 We slept in pretty late as a result this morning- then got up and made some delicious vegemite sandwiches for breakfast. Now I have something VITALLY IMPORTANT to ask you all. How do you make your vegemite sandwich? Saros and I disagree. My way is to butter (margarine) one piece of bread and vegemite the other. Then stick them together, and cut into happy triangles. Sarah, the infidel, butters both pieces of bread, spreads vegemite OVER the butter (which works with varying degrees of success) and then eat the two slices separately. What say you- which way to you go? 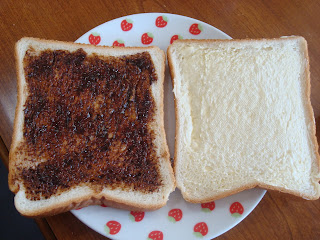 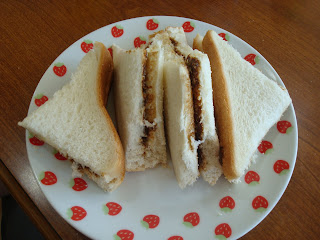 Anyhow we then went on a magical journey to Life, our supermarket, or hypermarche as the French say. Life is always fun and bewildering- lots of things to choose from, most things, we probably don’t like. I say probably, because half the time we’re not 100% sure what we’re actually buying. We got some sort of satay sauce today (hopefully), and are attempting chicken and veggies with noddles. Unsure of how this will work. We also got ice creams, which unlike my fears of accidentally buying beef flavoured ice cream, were actually chocolate and delicious. We also got what we think is a red been paste bun. We figured we might as well give in and try it. Saros has also been the voice of Anti-fun: “We can’t live on chips Carly, no we can’t have vegemite sandwiches every meal of every day, no Carly, you can’t fly…” and so on. For the record, I actually enjoy the vegemite sandwiches more than the chips. 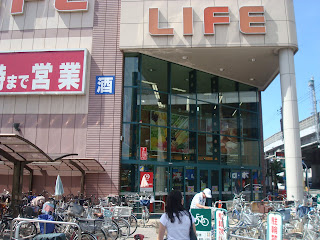 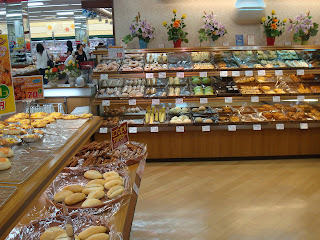 In the mean time, I’ve been being frustrated with the poor policy and replies of the Secular Party of Australia- I agree with every policy except their policy of banning religious dress in schools because putting it bluntly, it just won’t work. Unfortunately, the leader of the Secular Party is a shit minger with weak excuses and has very much disappointed me. I’m also devastated to realise we are missing the Palais’ first birthday! You can’t go back to those missed years- they grow up so fast… *sob*.


Aside from that, our Birthday greetings to LAURA COWLEY, whom we miss very much, and J HOOP’S cocktail partay tonight! If there was money on the bar, I’d be exceptionally sorry to miss it- if there wasn’t money on the bar, I’m stingy enough that I’d just miss the people! (C’mon, those drinks are hot but expensive!) Also shouts out to BEN WIGGINS and JHOOP again (on fire today J!) who commented, because we miss you, and love your comments. To my family, you are being shown up by my friends, and for your own honour, should hurry up and get an account to comment with! Still on the look out for presents (we’ve got some ideas and some cute bags to put the presents IN when we get them) so keep sucking up, xoxo Carly

P.S. Oh, also, there was an earth quake, but it was pretty small. We were half asleep and didn’t quite realise what was happening until it was over. Then we just went back to sleep. 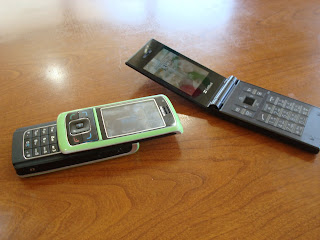 P.P.S. Stuff up time! I had this great idea when we got our phone- you get to choose the last 4 digits of your phone number, and I remembered the IT crowd (0118 999 88888 9119 725…3) Only, I didn’t quite remember it right, and we accidentally picked 729…3. We realised immediately after, but our number had been finalised. We felt very much like giddy goats! “You? Why you are nothing but an old man in a tent, sitting in rags, playing hoopaloo with the wind!”
Posted by Carly + Sarah at 1:34 AM