So today turned out to be pretty epic.

We met up with a group of people staying at JF House with us at 12pm for our beach adventure, which turned out to be a free beach party. On the way, we stopped at the supermarket for a six pack of cocktails in a can to take with us (All for $6! So Cheap!!) It took just over an hour to get to Kobe, using the subway and transferring over to the train to Kobe. 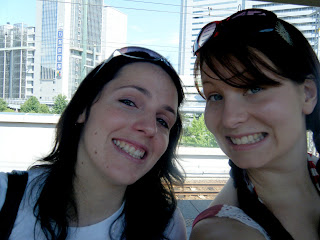 Needless to say, we still managed to get lost from the group at Osaka train station...which was like an ant nest with people running around everywhere. Luckily, Nicolas was with us and knew how to get to the train platform we needed where we found the rest of the group.

When we got to the beach, it was swarming with people, just like in the movies. We took some wicked photos, so once we actually get around to linking up the net...we will upload them.
To put it bluntly, their water is like murky algae-ridden shit brown. The kind of water 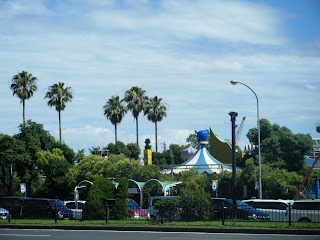 you just try not to think about...like the Torrens...no one wants to swim in that! However, it was that hot, and there were so many people already in the water, you didn't really notice how bad it was...until you got out, and the algae clings to every hair of your body, making you resemble some kind of chewbacca wilderbeast!
Think you can just wash yourself off? You thought wrong! Unless you want to pay $5 for a shower! However, us being the stingy asses that we are bought a freezing bottle of water for $2 and managed to get most of the crap off while whinging everytime we poured the water on ourselves. So we only swam once, and EVERYONE in the water has blow up rings, as very few Japanese can actually swim, which is why we thought it was weird when people were looking at us just swimming out into the deep. 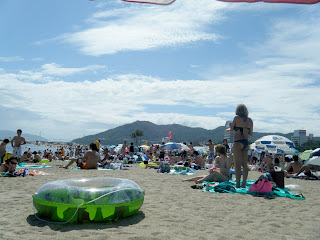 At around 4pm the bands started up on the two stages they had set up along the beach. One was reggae, and the other one was Dance and Hip-Hop. So as a group, we migrated to the Dance and Hip-Hop stage, which at first was playing some kind of American Hillbilly alternative rendition of Robbie Williams (yeh...it was pretty horrible), then later on the DJ's and MC's came on and played some pretty wicked music. 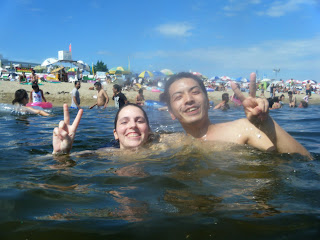 Before we knew it, the beach was packed and everyone was dancing along. The fact that they not only played Pitbull at least 4 times, but also Sexy Bitch and Tik Tok all in a row just made it even more awesome! The Lady Gaga Mash-up...maybe not so much, but I'm sure Carly begs to differ. Haha! We both agree though that Kings of Leon is still shit, even the dance remix of Use Somebody...apparently though, it's pretty popular in Japan, as with Gaga. 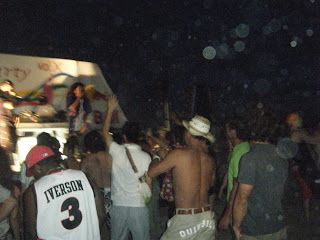 Anyway, it is now 1am, and we are falling asleep at the computer. Such an epic day and night, and tomorrow we are having lunch with Miho's Mum and her friend...apparently it's all you can eat...it's going to be interesting either way. So, this is us signing off for now...

PS Carly tried to get Nicolas, our French friend, to try Vegemite tonight, but alas, he was not sold! I guess it is just an acquired taste. 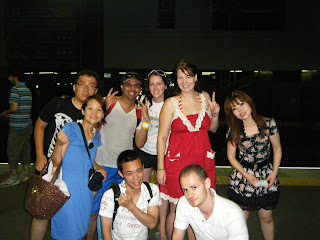 Night Minasan (Everyone)!
Posted by Carly + Sarah at 8:42 AM