Yew! Shouts out to KIM SIMPSON as the ONLY person to comment, you slackers! Well after a late night partying down at the beach, (we got side tracked awfully by facebook gossip and ended up going to bed at like 2am) we got up horrendously early (9am) to go and meet Chizuko, Miho's mum, who is super nice and helpful. We have to get her a present, no idea what though. We met Chizuko who introduced us to Yoshida, who was also very nice. She bought the three of us lunch at World World Buffet, a great combination of Italian, Japanese and French. Yes, I know you're wondering... THERE WAS CHEESE PIZZA! It was kind of similar to soft pita pizza (not crunchy) and while Sarah was not especially fond, I have quite a soft spot in my heart for it. I would have had more but I was trying not to look rude. I tried some other stuff, didn't like Italy's cheesy risotto but the Japanese noodles with yam and Okra were quite nice. 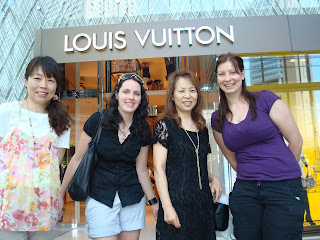 * Chizuko, Sarah, Yoshida and Carly in front of Louis Vuitton.

Yoshida suggested I practice my abysmal chopstick skills by picking up corn kernals- it was a long and comical process and I dropped many kernals into my lap. Yoshida, Chizuko and Sarah laughed many times at my expense. Then we had crepes for dessert- I had ice cream and strawberry Jam! Oh, and the drinks... we didn't realise there was coke until our second round of drinks- unfortunately Sarah had some kind of juice which she described as tasting "like arse" and my delicious liquid was apple juice with black vinnegar. It tasted like apple juice... and vinnegar. And you know, it tastes as you'd think it would- starts off a nice apple juice, ends with "Oh ugh, why, WHY oh sweet babies carrots WHY?". It was a relief when we discovered the coke, I can tell you. 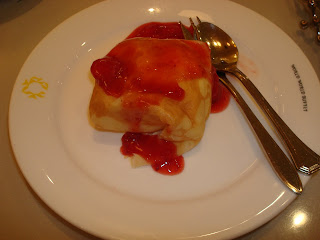 *My strawberry and ice cream crepe.

Sarah loved her Carbonara and some spicey Japanese pork. We then ended up going to an electrical store and after much debate, buying a Japanese phone to cheaply message within Japan. All the phones here are super slim and flip, not like my little fat bastard whom I love with all my heart. The phones come in a crazy array of colours here- everything does. Laptops are sweet and very cheap- want to get one (Sony Vaio in "get in my pants" green- bout $1000) but trying to conserve money. They had solar recharging phones that were water proof AND ridiculously colourful! As in, you stick your phone out in your yard to recharge, if the picture was anything to go by.

Then we went back to Yoshida's house- she is offering for us to rent it. Awkwardly, we don't really want to because it isn't set up with everything that JF (where we are now) has, it's further away from everything and only one room is air conditioned... and the kitchen looks confusing. We haven't told her yet, especially after she bought us lunch! The house itself was very traditional, tatami mats (bamboo) on the floor, sliding Japanese screen doors. The toilet was one of the special feature ones where you can heat your seat, have a flushing sound, a jet of water to wash your ...err... posterior... and more! It's bad because Yoshida was so nice and helpful.... hmm, I guess I can still help with her English class. 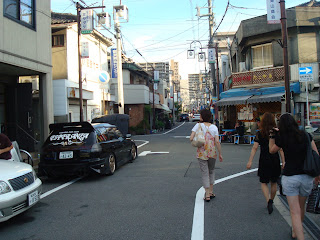 * Yoshida's street
On our way back, we made our usual stop at Life convenience store and on our way home, saw our first kitten. There was a foreboding feeling in my heart as I warned Sarah it was probably carrying rabies and not to touch it. Sarah, showing astounding common sense, went straight for the cat. However, when it looked into the light Sarah yelped and ran away. In her words, its eye was "pwowgh". What that means, I don't know. The small, possibly stray cat, looking for some love, attempted to follow Sarah who yelped and ran away faster. I bet the cat felt really good about itself after that. I felt bad, however, not wanting rabies, continued to walk away. It was actually more of a kitten, which Sarah seems to think was kicked in the face. (By RABIES!).
Hopefully it finds a loving home. We did find out something way cool- we kept seeing what looked like spiral slippery dips outside of tall buildings- turns out THEY ARE! They're there in case of a fire, for quick escapes. Seriously though, that's awesome.

We then returned for a great dinner of peeled carrot (we got some weird looks), banana, yoghurt and vegemite sandwiches. We, being good citizens, deigned to share our Vegemite with our resident Asians who, like Nicolas the Frenchman, were quite repulsed with a wide array of horrified gasps. Apparently Toyo is going to bring us some Natto tomorrow in retaliation. We then watched some kick ass TV show where from what we can tell, 5 guys compete against 5 girls. They have to answer questions before the time runs out and they explode (not literally, there's a computer screen behind them), like each having to name a fruit. They get pretty funny when they can't think of an answer, and the contestant panel shakes like.... A BOMB HAS HIT THE SHELTER!

Then they have a bonus round which is like those theme park rides where you watch a screen showing a roller coaster and the thing you're in moves accordingly- we left just as the girls failed to make the right choice and their mine cart plunged into a firey chasm of doom.
Now we have Skype, but you can only talk to one person at once so all of you, go to someone's house for a Skype party! Or take a number. We charge $3.40 for the first hour of our time and $1 for every minute after that. Also, the lighting in our room makes us look like we have patches of grease on our foreheads, not so attractive. Also somewhat alarming, as it is a very bright white to see.

Make sure you leave us a comment, we ain' Skyping you unless you do! (And we may mail you out some natto and tell you it's a delicious cake of some sort.) Going to attempt Spaghetti tomorrow- this could end poorly and if it does, I'm having Vegemite sandwiches AGAIN. I love the Vegemite- I will do it on the train, I will do it in the rain! IN THE RAIN PEOPLE, NOW THAT'S LOW! (-Yeah, we finished off S2 of Better Off Ted and Veronica is to die for!)

Think that's all, my Spanish friends. Adios amigos, or as the Japanese say,
...I don't know what the Japanese say, but I'm working on it. No, I'm not, but I'm getting pretty good at pronouncing "Kire Uriwari", our station (T33) on the Tanimachi line. Saros mingers it up every single time she tries it, causing me to have my revenge for the chopsticks-corn lunch fun.
Right, getting back to the goodbyes... On behalf of S-Minger (Sarah) and I,

Carlos- OUT!
(You should now picture me pumping a fist into the air, and launching off like a rocket into space.)
Posted by Carly + Sarah at 6:54 AM