After deciding last minute not to go to Pure (we were very disappointed with ourselves but it was the right call) we woke up the next morning with reluctance. Our first stop was the atms, to finally get cash out. We'd gotten a nasty shock on Sat when they were completely dead and we had about $3 in money and no Japanese place takes non-Japanese cards. Pretty annoying, if you ask me, and don't get me started on their stupid bikes! Anyway... We caught the train Miho's station but it was HOT! In no way were we looking forward to wearing Yukata outside in the heat.

We got there about 12:20 and Miho did our nails for us! It was a very intricate process, including removing my old bright green nail polish, several coats of... I don't know what, the top coat and then sparkly shiz! Mine are a kind of sparkly salmon pink with gold flecks and pinky-orange and green jewel things. Sarah had bright pink with black and gold flowers on hers. Then Saros and I attempted to paint our toe nails prettily with varying success- Saros had very little success and I had none. While this was happening, we were watching Fox Crime (with some great catch phrases- "Fox... Mysterious".... "Fox.... Crazy") and NCIS was quite thrilling! xx Gibbs! We also showed Miho Sarah's stop motion project (on my FB videos) and almost cried when we realised Tik Tok had disappeared from my videos. WHY GEORGELOCATION, WHY?! But, it was not her fault. 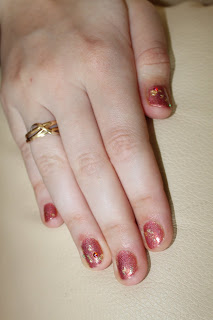 Miho's mum made us Yakusoba noodles for lunch, which were quite delicious, and we put our Yukata on. By the time we were actually ready to leave, it was 6:30. When I say ready to leave, I really mean "knowing we had to leave but quite happy just to stay anywhere with air conditioning". At least it had cooled down a little by that stage! 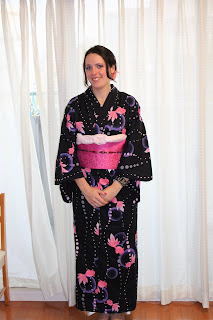 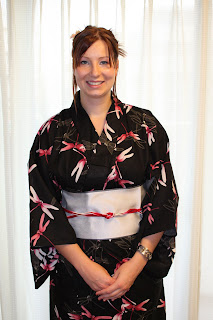 We wandered around seeing various side stalls of food- chips, biscuits, steak on a stick, octopus tentacles on a stick, manta ray? on a stick, Yakusoba noodles, shaved ice stalls, and all manner of cheap and nasty light up crap like you'd see at the show. No girls, those light up Minnie mouse bows do not look awesome in your hair, they look STUPID! 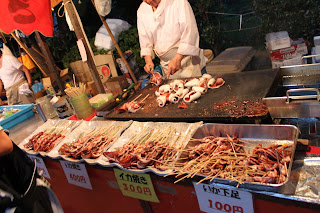 ^^ Mmmm, look at all that sea animal on a stick goodness!!^^ 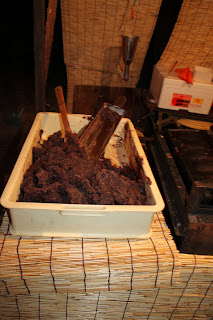 
We watched the fireworks from Miho's bf Yu's house (His real name is Yukato or Yurako or something, so Yu-san works for me)and it was quite different from here- the fireworks went on for an hour and a half with breaks in between. They'd do a burst of fireworks about every five minutes, which was kind of weird. Miho and Yu made us strawberry flavoured shaved ice, which was cool- they put condensed milk on top which gives it a flavour not unlike an unnerving strawberry milkshake. 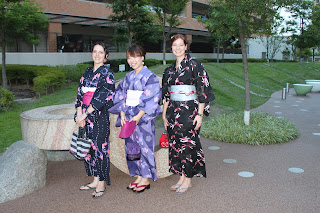 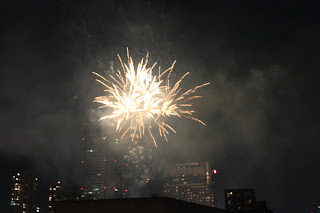 On our way back, Chizuko took us to Mos Burger, a place we were intruiged but a little afraid of. It was then we had our first J Cheeseburger! (It took a little explaining to get just cheese, meat an ketchup but we got there). This, unlike the pizza situation, was a double win; we liked the burger, but we didn't like it so much that we would go to Mos Burger every day! And, after staring longingly at the Furido Potato stalls (chips), I got my wish! 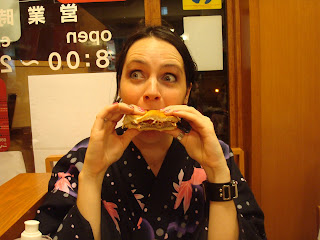 On the train home, we had to get off a few stops early. For some reason at night, most of the trains have some sort of "get off" message and everyone has to leave and get on the next train instead. We were lucky the first time that the guard found us and told us to get off, and ever since then we watch carefully when people get off. Unfortunately, luck was not on one Japanese man's side, as everyone got off but he was asleep and no one woke him. On the platform, everyone we kind of just staring and wondering what to do, but the problem was solved when the (almost)empty train took off. Every one on the platform just had this "oh...this is awkward... what will happen to him... should I have woken him up? Hmmm" expression on their faces.

When we got back to JF, we were greeted with great (drunk) enthusiasm, a whole group was drinking and we were keen to make up for Saturday's sobriety! We hightailed it down to Life, which was conveniently still open at 12am or so, bought some cocktails and got back to JF. We tried to teach everyone Cal Kings (no easy feat considering not everyone knows English and we don't know Japanese) but finally settled on Game of Goon (obviously without the Goon). Oche was pretty drunk and kept stuffing it up (no idea how long they'd been drinking before us) and Arthur, a guy we formerly thought was incredicreepy (incredibly creepy), was actually French and didn't speak Japanese. This was a problem for him, as our assigned numbers were Japanese (I was Juichi, Ju, Que, and Hachi) and he found himself drinking quite a bit. Everyone ganged up on Oche who was ridiculously, drunkenly inept and got caught out almost every time. 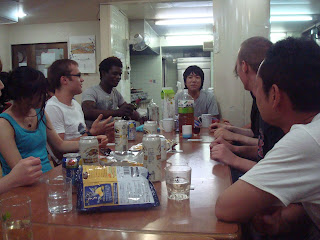 ^^ Nice girl, White shirt man (who left the next day), Oche, Shoe, (O-san and Arthur out of sight) Juerg, Toyohiko ^^

Finally, the party broke up (not after we helped make Arthur pretty!) and we headed up to the roof. Oche had disappeared to go to bed half an hour earlier but made a surprise reappearance on the roof for our dance party. Sez played some music and with the exception of SuperCoolRainbowHairGuy, everyone was dancing! We obtained Jeurg and Oche's promises to help us in our secret J-Project, which should be way exciting. 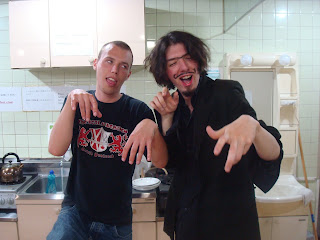 
Wonder how Arthur is feeling today? ;)

Shouts out to Kim: I assume you were meaning I looked like an ADORABLE spaz and we're trying to avoid pizza! Georgia: for your reasonably prompt assurance on Tik Tok, and hello, comment us! Kim again: You're awesome, what can I say? Also Ange and KIM AGAIN! You're a machine Kim, a love machine who is making up for the fact that NO ONE ELSE LOVES US! FEEL THE GUILT (and comment)!

Carlos, out! *picture me standing in a heroic pose on the top of the roof, shouting that*

P.S.
I've been getting lots of Deja Vu all over the place, which is weird.

P.P.S. If you want to post anything to us, please address to (and include the Japanese symbols/the image below):

We have a J Phone that can email people but the address looks like a virus:
ed3c8d3fd7vnjb@softbank.ne.jp
You can email us at this address and it will come through as a message on our phone, alternately, we can send an sms to your emails! Love it!