Where in Japan is Yoshida-san?!

First, we’d like to start by saying – Kirilly and Beno, you lost your bet. It has now been over a week and Carly and I haven’t killed each other...yet. Which means...you owe us something...we don’t know what yet...but something.

So Japanese Coco-Pops almost taste the same as ours! (Yay!) Although, they are weirdly shaped; probably about half the size of corn flakes ! Luckily, they’re still just like a chocolate milkshake only crunchy! We’ve sadly already gone through a half a jar of vegemite, so anyone got some spare in the cupboard, feel free to dispatch immediately!

Today we met a few of Miho’s friends. There was Mei-san and her boyfriend Howard-chan and another one...called...something...that we forget. We all met at her sub-station and walked to her house, which is on the 10th floor, and the view from her house is absolutely amazing! (Check out the photos!) 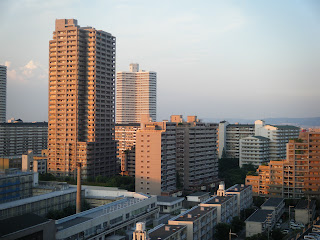 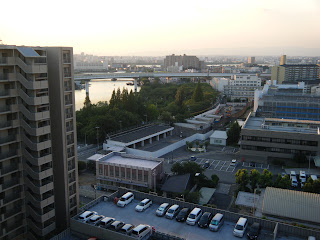 As a surprise, Chizuko-san shouted us dinner which was pizza! Haha! Now, I know you’re all wondering what we ordered, ok not really, so we made them order us a cheese pizza as the only other options were very creepy! (The pizza they got had oysters still in their shells, octopus and prawns...which I’m sure was delightful for those that love seafood... *shudder* Miho and her friends were excited to try our ‘weird’ style of pizza. Oh, and get this, so one large pizza from Dominos here will set you back around $50 Australian. It is a real treat to eat pizza here, and considering it was free...EVEN BETTER! As we probably won’t eat it again until we get back to Aus, or maybe in Italy on our contiki ;-P Traditional Styles! So when the pizza finally arrived, the smell of seafood was overwhelming, and quite...off putting. Then, when we opened our box, I could see the disappointment in Carlos’ eyes. The cheese pizza looked like an oversized brown omelette almost with a crust (even though it was actually cheese). There was a VERY thin layer of both cheese and sauce, and really, all it tasted like was plain dough with a slight tomato and TINNNY bit of cheese hint. So one thing is for sure, Japan, your pizza’s SUCK! Luckily Miho also got some potato wedges and tots, and there were at least nice.

Friday night is the Pre-Summer Festival, which is only tiny compared to what Sunday’s is going to be like. 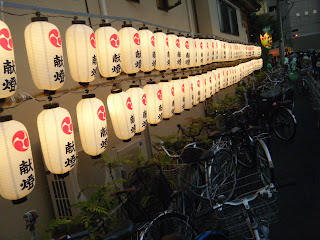 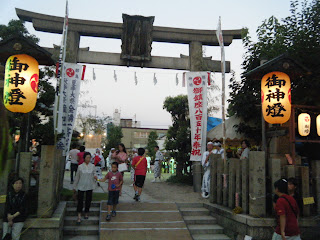 We walked down to the end of Miho’s street around 7pm to find everyone gathering around a shrine that was set up for a special ceremony. There were lanterns everywhere and sideshows and food stalls much cooler than the Adelaide showgrounds. 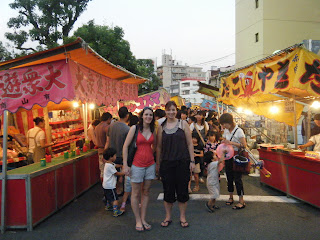 One game that looked really good, was a Goldfish catching game, where you get a rice paper net that slowly dissolves, so you have to catch as many live fish in a bowl as possible before it does, and however many fish you catch, you get a special prize! 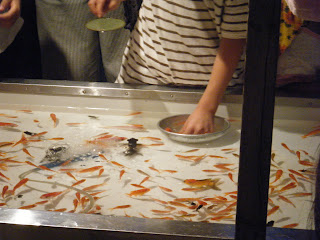 Another cool game was ‘Catch a Pooh’ haha which was similar to the goldfish game. 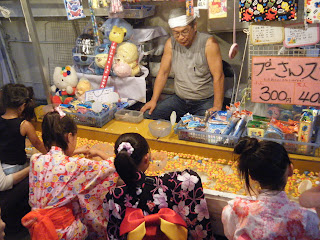 Lastly, this is a Japanese take on a 'Barbeque' haha... 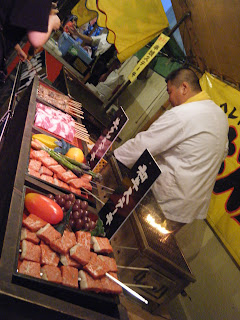 Once the ceremony began, we went to the shrine and watched the drummers on large floats get pulled up steep ramps while everyone cheered and clapped and chanted. At the entrance of the Shrine, the ramp was quite steep, and as the floats got larger, a few didn’t make it up on the first go, so they would pretend to try and get it up again, then let it fall back down.

At first Carly and I started laughing that they had already failed twice, before Miho told us it was superstitious to allow the floats to get up the ramp on an even number, so they only tried hard on odd numbers. Sure enough, two floats ended up taking 3 turns before they were able to get into the shrine.

On the way back to Miho’s, we came across giant ass worms as big as our feet (see the photo!) that just crawl out of the gardens and were all around the base of the apartments Miho lives at. Once we got back up to Miho’s house, Chizuko brought out our Yukata’s (Summer Kimonos) to try on. 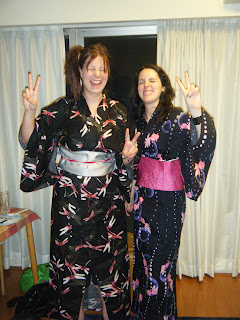 And, just where in Japan is Yoshida-san? Well, we’ll be seeing her on Sunday. 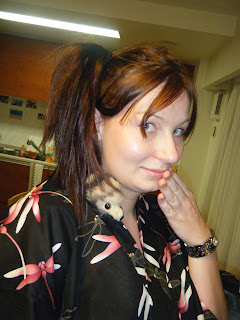 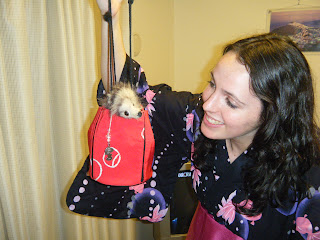